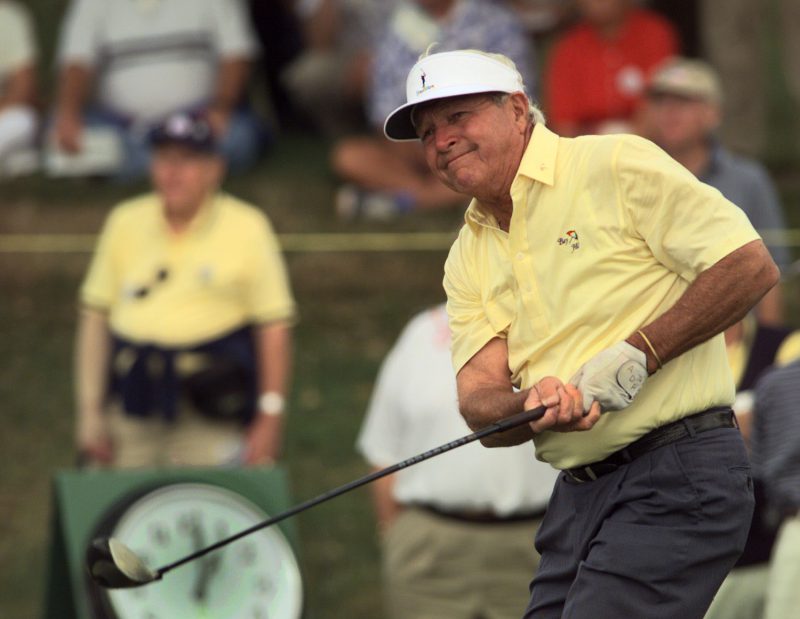 No European tour event this week so the world of golf’s gaze is firmly trained on Florida where the famed Arnold Palmer Invitational takes place at the Bay Hill Club.

And this year’s tournament will mean so much more to everyone involved, as this is the first time the tournament will be played since Palmer’s death in September last year.

Palmer was one of the greatest golfers of all time, winning six majors and along with Jack Nicklaus and Gary player was credited with the popularisation and commercialisation of the game which now sees is it as a multi-billionaire dollar industry.

Know as The King he is regarded by many as the sport’s most important trailblazer.

Arnold Palmer's presence will surely be felt at this year's @APinv.https://t.co/l1tK5HFSs7 pic.twitter.com/4O81TsVuRc

200 players take to the field this year and a clutch of the world’s top players will be present for a tournament that first took place back in 1966.

Jason Day is the defending champion and he is one of the world’s current top-ten who will be playing in Orlando with Rory McIlroy, Hideyki Matsuyama, Henrik Stenson and Rickie Fowler also present.

Indeed Fowler is one of those who is taking the event very seriously in honour of one of the game’s greatest ever players, and he is paying his own tribute.

Check out Rickie Fowler's spikes for the week, which he will wear in honor of the King at Bay Hill pic.twitter.com/GJsbLcRhP1

Not all the world’s top players have made the event and world no 75 Billy Horschel – who will be playing – has hit out at the players who will not be playing this week.

“It’s Arnold Palmer’s event. We wouldn’t be where we are without him,” Horschel said.

Ian Poulter – who will be playing – was quick to defend those who will not be playing, admitting the course was the main reason why they might miss this week, with many already looking at their Masters’ preparations for next month.

“It’s going to be a celebration of Arnie. The field is fine. There are some people who do not like that course and they are absolutely not disrespecting Arnie,” said Poulter.

“We all obviously want every player from No 1 in the world in the rankings to 100 … we’d love for them all to be there. It’s impossible. I don’t think we have to discuss who isn’t there – it’s unfair to the tournament. Let’s focus on the family and make it a great week for them.”

Only five non-Americans have ever won this event and the home players are expected to make a big charge here, but with no European event – the overseas charge will be a strong one.

I think the Europeans will go strong again here this week and Rory looks to be getting into some good shape ahead of the Masters so McIlroy is one for me, along with Matsuyama – who is playing really well and I would also put in Paul Casey, he is could contend this week for me.

It’s been a slow start to the week, with punters most likely saving their money for Cheltenham instead of the golf. Things should pick up leading up the the start of the tournament.

McIlroy is proving to be the most popular of the short priced players as punters believe he’s fully recovered from his early season injury.

This tournament has thrown up plenty of outsiders, including Matt Every winning back to back in 2014 and 2015. and a player who’s had a steady start to the year, whose game should suit the course is Francesco Molinari and I see him going well.

Our point of view…

Should be a good week and Jason Day if he wants to do well at The Masters needs to start getting his game going and he won here in 2016 so should go close. For the home side we think Rickie Fowler could show up well again along with Billy Horschel.