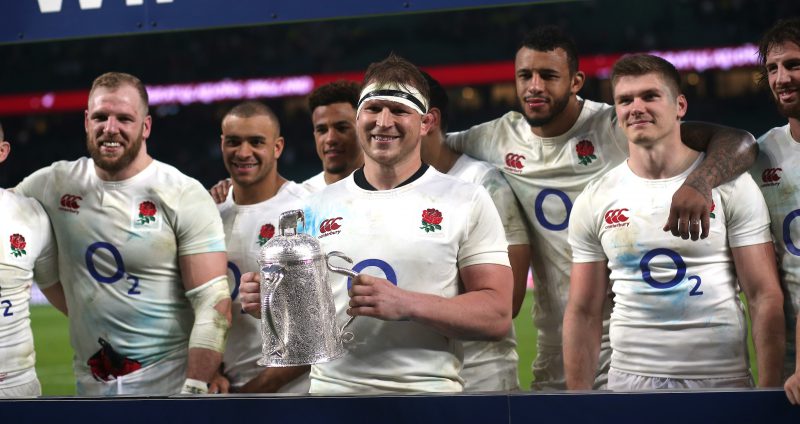 England look to become the most successful test side of all time whilst also claiming back to back Grand Slam’s when they face Ireland in Dublin on Saturday.

Eddie Jones’s side are currently level with New Zealand for the most ever wins in Test rugby with 18 – they lost that last year to…Ireland, who are now looking to do the same by putting England’s run to a halt.

Ireland are licking their wounds from their defeat in Wales, which handed the Six Nations title to the English – but they could still spoil the party for the visitors.

Jones is prepared for the match and is expected a tough task and said: “Complacency is always lurking in the shadows.

“They’ll have all guns blazing. They were favourites for the comp but now they’re out of it so we’re expecting a tough encounter.

“It would be a huge achievement for the team, and we all work together. Stuart Lancaster deserves a lot of credit for bringing most of the guys through.”

England have made two changes to the side for the match with number eight Billy Vunipola and winger Anthony Watson returning to the side after being amongst the replacements last time out with Nathan Hughes and Jack Nowell making way.

Ireland have a number of injury doubts but Johnny Sexton and Conor Murray are both set to be fit for the Dublin encounter.

In Paris and France take on Wales, and the winner of this clash could very well finish second – if England win in Ireland.

France head coach Guy Noves has made one change to their starting line-up with second-rower Sebastien Vahaamahina coming in for Julien Le Devedec.

Wales are unchanged again for the clash, following on from their win over Ireland last week.

In Scotland and Vern Cotter has his final game in charge before leaving his post and making way for Gregor Townsend’s and he has made one change with Ross Ford coming in at hooker.

Italy have made four changes for the club with George Biagi, Maxime Mbanda, Ornel Gega and Tommaso Benvenuti coming in.

The GamblingTimes.com brings you exclusive reaction and insight on every game from Inside Rugby’s Stuart Watkins and BoyleSports’ Leon Blanche.

MATCH ODDS: Scotland 1/40 Draw 66/1 Italy 11/1
STUART SAYS: Scotland should clearly win – their pride took a huge battering against England last week, nobody saw that coming and they will need to bounce back they have quality players and that will probably serve as a wake up call to them and they should win this game, but it might not be a hugely emphatic scoreline.
THE BOOKIE SAYS: Vern Cotter has done so much for Scottish rugby and the players probably feel they owe him one, but they have had a lot of injuries and Italy will be hard to get by. Scotland will win but I like the look of most point in the second half at 6/10 is very tempting given Italy’s record.

MATCH ODDS: France 4/7 Draw 25/1 Wales 7/5
STUART SAYS: This is ready hard to call and the home advantage is often crucial in these close games and France are showing signs of improvement and the chance for them to finish on a high I can see them doing this, Wales were good last week – but I think France should just about do it.
THE BOOKIE SAYS: It was a big win for Wales last week, under a lot of pressure but going to play France away will be a much trickier contest and I would be looking at France here and -4 is quite appealing despite the confidence that is clearly in the Wales camp now.

MATCH ODDS: Ireland 13/10 Draw 25/1 England 4/6
STUART SAYS: Very is so much riding on it from both Ireland and England. Ireland will get a lift from trying to stop England. If you look how down England were after the World Cup, Eddie Jones has caught everyone’s imagination and I think England will do it, their key players are doing well and they will have too much, although Ireland do have a team good enough to win – but England should do it and break the record.
THE BOOKIE SAYS: Ireland were not far away last week but against Scotland and Wales they have shown deficiencies and not converted from good positions. England are trying to break records and I think it will be a very close game, but you have to side with England but the +3 for Ireland I would look at.