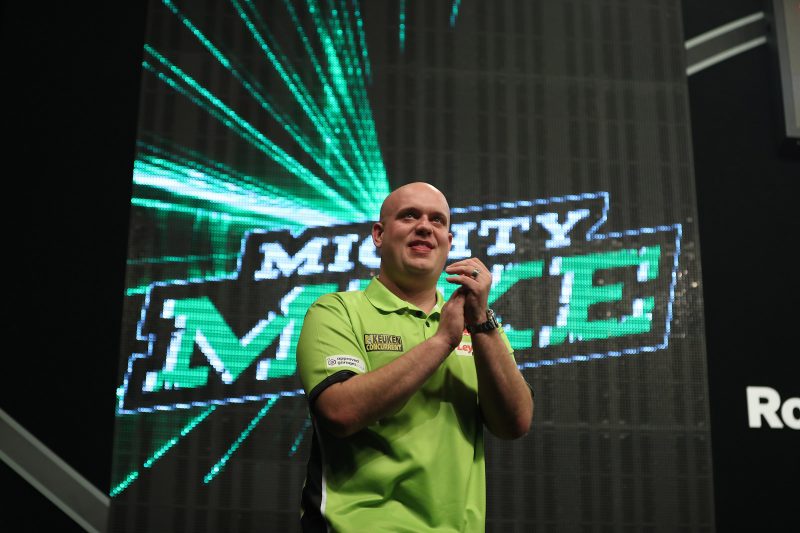 Michael van Gerwen is aiming to move top of the Betway Premier League table when he doubles up at The Manchester Arena on Thursday, as Kim Huybrechts and Jelle Klaasen bid to remain in the tournament.

Reigning Premier League champion Van Gerwen has a game in hand over his rivals in the event after missing the recent league night in Exeter due to a back injury.

The World Champion remains the only unbeaten player in the tournament ahead of the eighth league night in Manchester, where he will take on James Wade in his rearranged fixture and then face Dutch rival Raymond van Barneveld.

Last week’s 7-4 win over Phil Taylor in Rotterdam meant that Van Gerwen remains a point behind current league leader Peter Wright – but the world number one is aiming to leave Manchester back at the head of the standings.

With only Thursday’s event in Manchester remaining ahead of Judgement Night in Cardiff next week, the league’s bottom two players – Huybrechts and Klaasen – face huge nights in their bids to remain in the event.

The pair sit three points adrift of Dave Chisnall – who sits out the Manchester event after playing twice in Exeter – with the trio of Adrian Lewis, Gary Anderson and Phil Taylor four points clear of the bottom two.

Klaasen faces Lewis in Manchester,  whilst Huybrechts will play Anderson as they both bid to avoid elimination from the tournament.

The night in Manchester also sees Peter Wright bidding to continue his strong form when he plays six-time Premier League champion Taylor, who is out to end a two-game losing run.

We have a run through of each game with exclusive insight from Betway’s Alan Alger.

MvG is doubling up in Manchester and that will suit his style of play. Of course he can have the odd bad leg (who doesn’t), but class should come to the top in game one with a comfortable victory. He’s heavily odds-on though, so we need to be clever. A correct score bet looks to be the way to play it and Wade can take three legs with his own blend of talent. 7-3 to MvG at 9/2 looks the best play.

Gary Anderson has only two victories from seven games in this year’s Premier League. He was heavily beaten by Barney in Rotterdam last week. But tonight he takes on a man without a single victory to his name. You’d expect him to justify odds of 2/5 here. Huybrechts is always good for at least three legs (he hasn’t performed under that level, even without a victory). Back Anderson to win 7-4 at 11/2.

Peter Wright has the sign over Phil The Power in Premier League matches. Wright is the only player that Taylor hasn’t beaten in this competition. The time is running out for him to correct that stat. Wright is flying at the top of the table and in blistering form. He’s worth backing to win this 7-4 at 9/2.

Jelle Klaasen is rooted to the bottom of the Premier League table and is staring elimination in the face. Adrian Lewis is keeping his head above water in mid-table, but needs a win here to be sure of troubling the top end of the standings. Backing Lewis to win 7-4 looks a solid proposition on the correct score market.

Barney came alive in Rotterdam – smashing Gary Anderson 7-2. This might feel a little bit after the Lord Mayors show and his clash against an already warmed-up MvG won’t suit him. I’d be backing MvG to win comfortably on the handicap giving up a 3.5 leg start at 6/5.