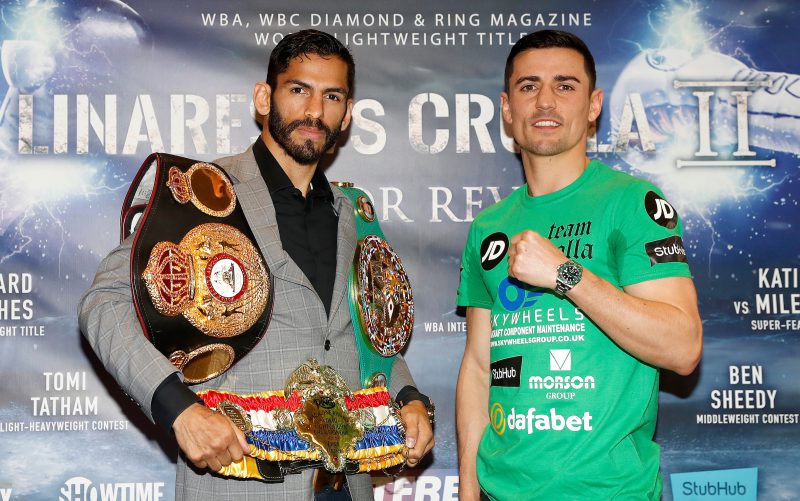 An exceptional month of boxing will finish on a high with the eagerly-awaited rematch between Mancunian hero Anthony Crolla (31-5-3 13KOs) and Venezuelan stylist Jorge Linares (41-3 27KOs) for the WBA World lightweight title.

Last time, ‘The Golden Boy’ emerged victorious against ‘Million Dollar’ in what was a thrilling fight for the fans last September in the Manchester Arena, the same setting for this rematch.

It will be Crolla’s 11th fight at the formerly titled M.E.N Arena, originally debuting there back in 2006 with Joe Calzaghe topping the bill.

Even with that same passionate, audible home crowd behind him again, I believe the result will be replicated with a points win to Linares.

The Boxer from Barinas is a class act, he can go up and down in gears like it’s nothing to him, and, for me, he is just that level above his English counterpart, however much it pains me to say.

I want Crolla to win, I’ll be supporting him and cheering him on, and I do believe that it will be a very close, competitive fight; closer than the first, I’d expect.

BetFred are sponsors of the fight and we spoke exclusively to their spokesman Pete Spencer about the match-up.

“Last time it was even-stevens on the betting front but after Linaress’ points win at the same Manchester Arena, it is the Venzuelan who is the odds on favourite at 1/ 2 to be outright winner at Betfred,” he told TheGamblingTimes.com.

“The “same again” result ie Linares on points is however the most popular bet at 6/4 and we have had several £1,000 bets on that happening.

“Having said that there is plenty of support for Manchester’s latest boxing hero Crolla, who garnered widespread support after bravely tacking burglars at his neighbours’ home  fracturing his skull in the process.

“Crolla is an attractive 11/2 to win by ko, tko or disqualification which has had plenty of backing from locals – and if that happens he’ll become a legend on the world stage and win him his dream of a fight in Las Vegas with Mickey Garcia.”