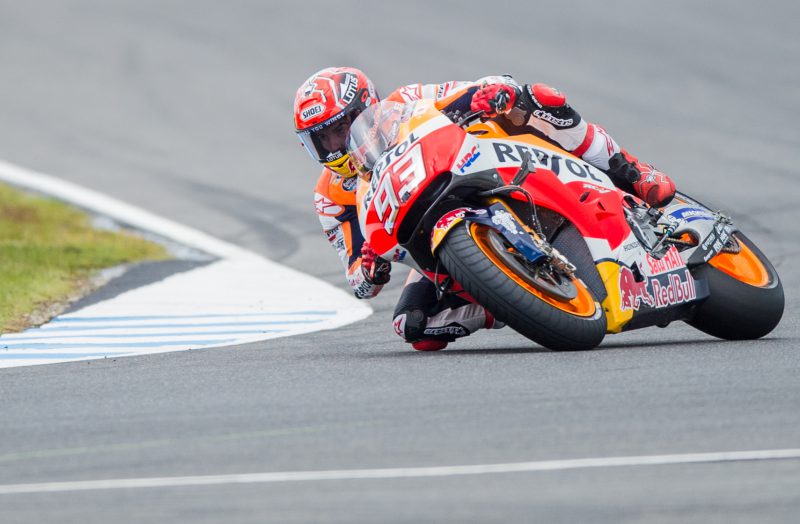 MotoGP roars back into action this weekend with Spanish ace Marc Marquez defending his title.

The action begins in Qatar and covers 18 rounds before ending in Valencia in November.

Marquez remains with Honda, but two big winter moves saw Jorge Lorenzo switch to Ducati. Lorenzo’s spot opened up a factory place for Maverick Vinales – who has emerged as the favourite with bookmakers for the 2017 title, having impressed in every pre-season testing session.

The young Spaniard has been in sensational form and he is now seen as the biggest threat to Marquez, although legendary team-mate Valentino Rossi is looking for his eighth crown.

MotoGP also welcomes a new manufacturer with KTM launching in the sport with the new RedBull backed factory team which will feature British racer Bradley Smith.

Another Brit Sam Lowes makes the step-up with Italian manufacturer Aprillia, joining Smith, Ducati’s Scott Redding and the big home hope Cal Crutchlow – who is on the Honda RC213V, the same bike as leading Spaniards Marquez and Dani Pedrosa.

Crutchlow won two GPs last season and hopes are high he can compete for more wins this season, which could result in a title charge.

We spoke with BT Sport’s MotoGP presenter Gavin Emmett for his views on the new season.

“It’d be naive to think of Maverick Vinales as a dark horse for the title, bearing in mind that he’s been fastest in all four of the official pre-season tests,” he told TheGamblingTimes.com.

“However, it is still his first season as a genuine title contender and Qatar is his first race on the Yamaha, which came out second fiddle to Honda last year. Add to that he’s teammates to the GOAT Valentino Rossi and if he prevails it will be the start of a new era in the sport.

It would also be strange to consider Jorge Lorenzo as an outsider, being a three-time MotoGP World Champion, but his shock switch to Ducati means he has to be one.

“They haven’t won the title since their one and only triumph in 2007 with Casey Stoner, so he’s up against it. On top of that the bike’s attributes don’t play to his strengths as a rider, but if there’s one thing Lorenzo has it is bucket-loads of talent, and if he can sneak an opening day win in Qatar, you never know what kind of bounce that will give him for the rest of the season.

“Dani Pedrosa is MotoGP’s nearly man, the most successful rider in history to never have won the big prize. Injuries have always blighted him at crucial moments throughout his career, and he’s struggled to keep up with his team-mate Marc Marquez for the past couple of seasons. However for his 12th attempt at glory he’s changed his back room staff, with a new crew chief and a new rider coach in the form of Sete Gibernau, Rossi’s old nemesis.

“With testing having gone well and the diminutive Spaniard injury free, then he could well be the one big name passing well and truly under the radar.”

WilliamHill make Vinales their favourite at 9/2 for the Championship, but spokesman Rupert Adams has a liking for Rossi.

“Maverick is an astonishing favourite considering that he is new to the team – therefore I am going to stick with my old favourite Valentino Ross, who is a very tasty 9/2,” he told TheGamblingTimes.com.