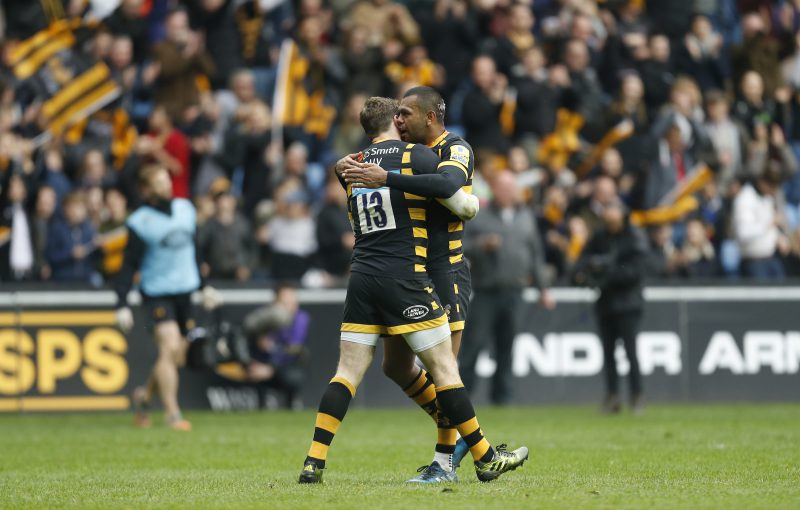 Saturday will see a new team crowned Aviva English Premiership champions as Wasps take on Exeter Chiefs. This Twickenham showpiece was meant to be Saracens’ party for the double double after their European Champions Cup triumph.

Yet this script was torn to piece in a weekend of spellbinding Premiership semi-finals.

A defiant Exeter Chiefs, who with a last-minute try sealed their place in a second successive final, ousted Saracens in front of a partisan Sandy Park crowd, while Wasps overcame Leicester Tigers late on in a similarly bruising encounter to claim a five Premiership final appearance.

Last year Exeter were the bridesmaids to the runaway Saracens train, but this time they head into the final having taken down the best team in Europe, yet they come toe-to-toe with a Wasps side who have gone the entire season unbeaten at home as well as winning all of their Premiership final appearances to date, victorious in 2003, 2004, 2005 and 2008.

The last time Wasps and Exeter locked horns they played out a 35-all stalemate in the Premiership and now they come together as two top-scoring sides from the regular season having finished one and two respectively, Wasps edging it on points difference.

In the semi-final the Chiefs were typically audacious; Henry Slade produced one of the greatest kicks from hand of all time – finding touch for a five-metre line-out from 70 metres out. From there, the set piece and driving maul was manna from heaven for the potent Chiefs pack.

It will be the Chiefs forwards who will make the difference this weekend.

Both sides have an excellent attacking record, Christian Wade the standout tryscorer for Wasps, chalking up 17 already, but the Coventry-based side have been sporadic in attack.

When it comes to nailing colours to the mast, it has to be Exeter by eight, given Wasps’ lone frailty is conceding too much at set pieces, something the Chiefs should expose to maximum effect.

Twickenham will be packed to the rafters, the last people out of Devon will be asked to turn the light out as the county will be out in force to cheer them along, but they will not go into this final complacent.

Wasps have actually won the last ten finals they have contested in all tournaments, while Exeter have lost their last three in all competitions.

It is time for the nearly men of Exeter to assert their authority and take the crown they rightly deserve.

We spoke with BoyleSports’ Leon Blanche ahead of the final this weekend to get his views.

“Exeter beat Wasps in the semi-final last year before losing to Saracens. They have got a very strong pack and that could be the difference between them winning this or not.

“I don’t see there being a lot between them and the odds suggest that, it could go either way.