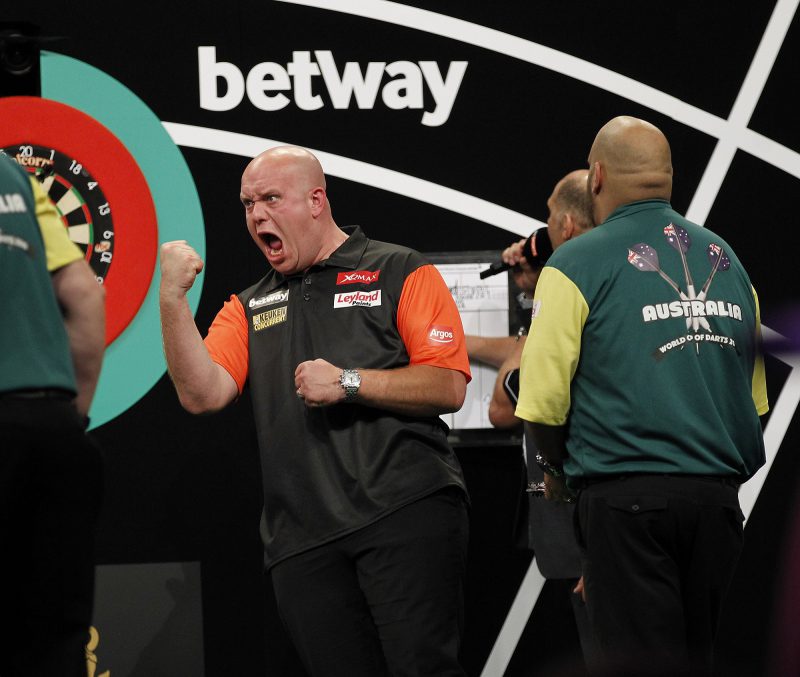 32 darting countries, from 6 continents, will be represented in Frankfurt later this week for the seventh PDC World Cup.

This unique event is very different to the darts we usually see on our screens, as teams of two compete in singles and doubles action for national pride and a £60,000 winner’s purse.

However, despite the global aspect to the tournament and a quick, quirky format for TV, realistically only a handful of teams seem to be in real contention to win it. Even so, these ‘levelers’ have brought about some surprise results in the past.

Of the previous 6 editions, the competition has exclusively been won by big hitters England (4 times) and the Netherlands (twice).

Wales, Australia, Belgium and Scotland have all reached a final in the past, but you can’t really win this championship without a cohesive partnership and both halves pulling their weight.

Defending champions are the English, who this time are expressed by Adrian Lewis and debutant Dave Chisnall; the two highest ranked players of each nation from the PDC World Rankings qualify. This means, for the first time ever, that the soon-to-be retired Phil Taylor will be absent.

The Dutch duo will again be Michael Van Gerwen and Raymond Van Barneveld – Jelle Klaasen should have been Michael’s partner, but he allegedly withdrew due to a wrist operation.

The two Vans won together in 2014 and just shade the top of the pre-tournament outright odds. There is some sort of chemistry between them, but with both being such big icons – and with the generational gap too, I often wonder which one of them thinks they are ‘in charge’.

Number 1 seeds by virtue of being second and third respectively in the rankings are Gary Anderson and Peter Wright, who appear to have put their personal ‘feud’ to one side. The Saltires have failed to impress in the World Cup as a whole, although this pair did make it to the final in 2015.

I really can’t see any other team challenge the big 3 for the top prize come Sunday evening in Germany, although at least one of the less fancied entries will make the Semi-Finals with the second quarter of the draw looking open.

That section of the sheet is likely to be won by either Wales or Australia. The Welsh have the improving Gerwyn Price – who is on the cusp of the World’s Top 16, teaming up with former BDO World Champion Mark Webster, who in comparison is still currently just a shadow of the player he was.

If someone was to break the mould it could be the Aussies. Simon Whitlock has recovered slightly over the last 9-12 months, whilst Kyle Anderson was climbing the ranks before cruel visa problems forced him to miss the business end of 2016.

Elsewhere in the event, Northern Ireland (who made the Last 4 in 2016) have a similar predicament to the Welsh. Daryl Gurney continues to make in roads, but Brendan Dolan has been on a bit of a disappearing act.

Belgium have upset the odds before with brothers Kim and Ronny Huybrechts doing damage. 2017 has been a difficult year for them so far on and off the oche, but perhaps the death of their mother may inspire them to do well; back in 2013 they reached the final not long after their father’s passing.

With the competition featuring doubles, that could have an effect on the quicker players as they will be throwing just once in four visits.

Of the major events in 2017 so far, MVG continues to rule having claimed the World Championship, Masters and Premier League.

Wright picked up his first TV major at the UK Open (Van Gerwen withdrew due to injury) and has chalked up a very impressive hat-trick of victories on the European Tour circuit, which included a 6-0 final win over the World Number 1.

With a change of darts, Anderson returned to winning ways by defending the Dubai Darts Masters last week – the first leg of this year’s World Series.

As top seeds, Anderson and Wright would avoid both England and Netherlands until the final. For England or the Netherlands to win it, there is a real possibility they will have to beat their two closest rivals consecutively. Saying that, England are as big as 6/1, which could present a little value.

At best odds of 7/5, I’d shade on the side of opposing the Dutch.