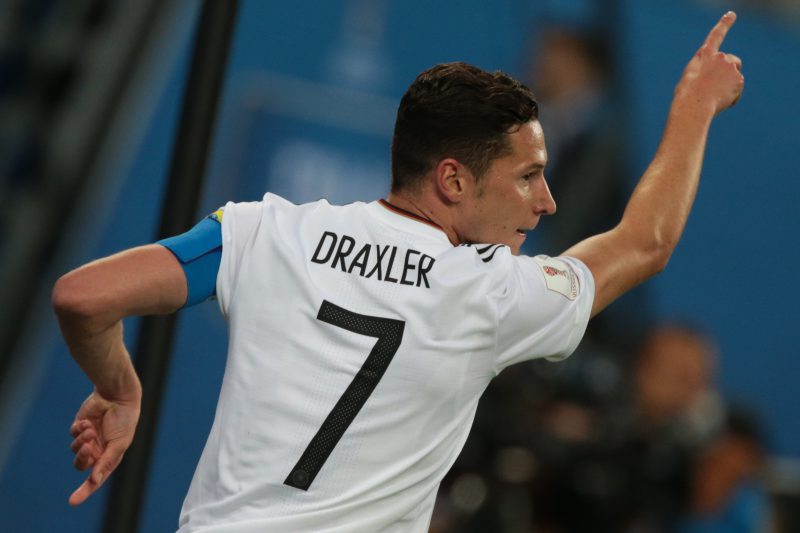 Arsenal, Chelsea, Liverpool and Manchester United have all asked Paris Saint Germain about the situation of Julian Draxler.

The German winger signed for PSG in January and bagged ten-goals following his move from Wolfsburg.

Following the signing of Neymar, it is understood Draxler may find himself surplus to requirements – which has led to a host of Premier League clubs showing an interest in the 23-year-old.

Sources in France have told me Arsenal, Chelsea, Liverpool and Man United have all made enquiries, and PSG responded by letting them know he could be available.

However, the player’s camp have been quick to insist that he is settled in the French capital and not looking to leave.

“Draxler will stay and will not be sold this summer,” his agent Roger Witterman has insisted.

“Paris is building a group with the best players in the world at every post, and Julian is one of them and he wants to continue to be part of it”

Despite the claims from the player’s camp – it remains to be seen whether PSG will look to move him on or not or indeed whether any of the English clubs will make a move for the player.

I understand Arsenal are very interested in Draxler, a player they have bid for earlier in his career – and having been unable to strike a deal for Monaco’s Thomas Lemar or Leicester’s Riyad Mahrez, a move for him could become a realistic option.

Liverpool are rated as 2/1 favourites to land Draxler, with some feeling he could be a replacement for Philippe Coutinho – who wants to join Barcelona.

Alex Apati of Ladbrokes said: “Liverpool fans won’t want to see Coutinho leave this summer, but the arrival of Draxler would certainly go some way towards cushioning the blow – and at 2/1, there’s every chance of a deal being done in the coming weeks.”