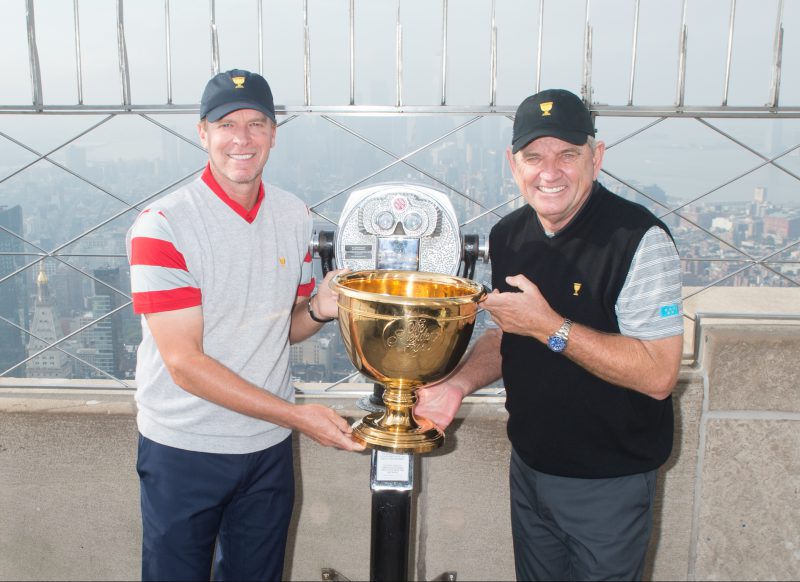 A fascinating weekend of golf action on both sides of the Atlantic this weekend with the popular Presidents Cup taking place in America and the British Masters taking place in the North East of England.

The Presidents Cup is very much based on the Ryder Cup in terms of format, and sees the United States take on the Rest of the World minus Europe, and means the American teams play a match on a yearly basis.

The Presidents Cup now takes place on odd years with the Ryder Cup on even years. This year’s event takes place at the Liberty National in New Jersey.

This is the 12th hosting of the event and the USA have won the last six, indeed the International side have one just once.

Steve Stricker is captain for the US team, with next year’s Ryder Cup captain Jim Furyk one of his assistants along with Fred Couples, Davis Love III and Tiger Woods.

Stricker believes the New York crowd are going to give America a big advantage this week.

“You know, when you go to an event, any sporting event in the New York area, they feel like their ticket, the New Yorkers it buys them the right to be able to yell whatever they want, where other parts of the country, that is a little bit more subdued,” said Stricker.

“We’ve played here enough, and you’ve got to have a little bit thicker skin here and just let it go in one ear and out the other at times. I imagine they’re going to be so pro‑USA that we’ll get a huge lift from it.”

Price is taking charge for the third time, and he admits he is desperate to win.

“We’re tired of losing. There’s no doubt about that,” Price said.

“Adam Scott has been on seven teams in a row and he hasn’t won one yet,” Price said. “That’s an awful lot of golf shots to come up empty-handed.”

Glittering crowds and shimmering clouds amongst canyons of steel.

USA include six debutants for the match with the international side going with four also.

Away from the Presidents Cup in Europe, the British Masters takes place – with Lee Westwood hosting the event at Close House near Newcastle, the club he is officially attached to.

Westwood’s presence has meant a stellar field, which includes Northern Irish star Rory McIlroy – who decided to play after his shock failure to qualify for the PGA’s end of season Tour Championship.

McIlroy is clear favourite to win in the North East, and is the highest ranked played at world number 6 and he is hoping to end his season in style, as he will play at Close House before heading to his final tournament at St Andrews to feature in the Dunhill Links.

“If I can sign off the year with a win or two in Newcastle and then St Andrews I would take so many positives into my six-week recovery period when I am going to reset mentally and physically and concentrate on getting myself in the right shape for next year,” he said.

World number 10 and Masters champion Sergio Garcia is also present, along with some of the biggest current names in European golf. Defending champion Alex Noren, Bernd Wiesberger, Matt Fitzpatrick and Ian Poulter are all lining up at Close House.

Along with Westwood himself, there is plenty of British interest in the event and fancied to take a home win.

“It’s an incredible field really, it’s never easy to find the right date for a lot of the lads to come but Sergio [Garcia] and Rory [McIlroy] and many others [are taking part]. It’s had great support from British and European players, I couldn’t have asked for a better field,” he said.

A truly unforgiving green on no.17 😅 A challenge for pro's and amateurs alike #britishmasters pic.twitter.com/bnB5jgm9ee

So I am delighted to be attending the British Masters this week and I am really looking forward to it – as PGA pro based in the North East it is great for the sport to get promoted in the area. Looking at the Masters I think host Lee Westwood looks in confident mood and is really up for it.

I think accuracy is important on the Colt course and Sergio Garcia looks to have a bit of a bounce in his stride and he could land another Masters quite easily here.

Over in American and the Presidents Cup looks fascinating and although close I don’t see how USA don’t win!

We caught up with Unibet’s Alistair Gill

As we approach the start of the President’s Cup, all signs continue to point towards yet another win for Team USA. With no major drop outs or team amendments, the little bit of doubt seems to have disappeared from the market, with all other outcomes drifting in the face of a US victory shortening yet further, in from 7/20 to 3/10. Unibet now goes an even longer than before 33/10 on Team International (from 5/2) with the draw drifting too out from 12s to 14/1.

With 9 previous wins out of 11 for the Americans, one of the remaining 2 being a draw, and the average rank of Team USA being 17 spots higher than that of their International counterparts, the signposts all point towards business as usual and a US victory. For the value hunters amongst us, there is may be a justifiable case to say 3/10 is a too short, and 33/10 represents a decent price for an undoubtedly talented Team International containing some in form players. But that may be little more than hope that the bigger price comes in, and it’s not value if the other side is so short for a reason!

Although the British Masters has been given a huge boost by the inclusion of star names Sergio Garcia and Rory McIlroy, the market is a little more underwhelmed by the inclusion of the 2, seemingly viewing it as little more than the attempts of a desperately out of form superstar trying to rescue an inconsistent season in McIlroy’s case. Although installed as a firm 9/1 favourite with Unibet, McIlroy has barely troubled the scorers as far as the traders are concerned, bringing in less than 0.1% of all money on the tournament the day before it starts. Garcia, second favourite at 11/1, has faired no better, accounting for a measly 0.13% of the money.

The punters are fairly unanimous in their backing of the next 2 in the market, 14/1 Alexander Noren and 20/1 Matthew Fitzpatrick running away with the prize for being backed by punters, the only 2 in the field to have seen more than 10% of all turnover. Noren has shortened from 16/1 since opening and Fitzpatrick has gone in the same direction, opening at 22/1 before settling on his current price.

If McIlroy can get a good start, we are likely to see the money pour in at such value in a tournament he would surely walk at his peak. But, much like the rest of the season, there is no guarantee that form will materialise, and clearly the punters have abandoned him as a result.