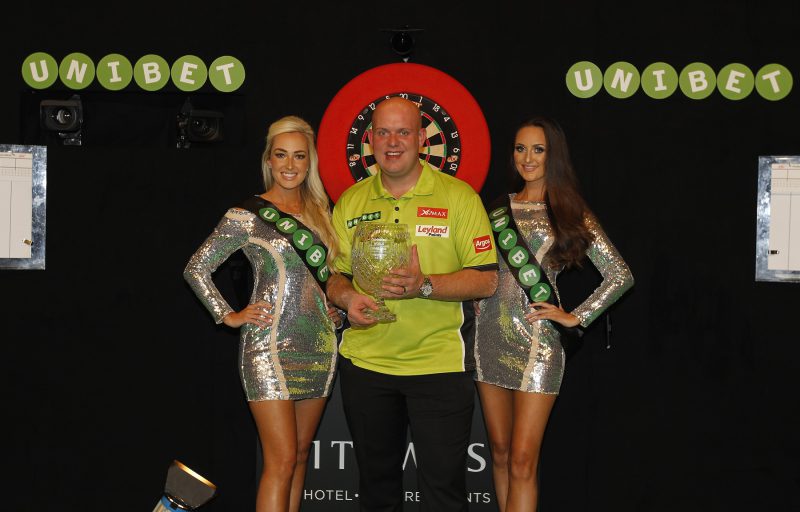 It’s the 20th annual staging of the World Grand Prix this weekend from Dublin; one of Darts’ most unique and enjoyable events. Action gets underway Sunday evening on Sky Sports.

The World Grand Prix has been a mainstay of the PDC circuit since 1998 – only the World Matchplay and Championships have been going on longer. Early editions were held in Rochester and Rosslare but the event found a permanent home at the Citywest Hotel from 2001 onwards.

Due to the booming expansion of the professional Darts scene in recent years, perhaps other events have overtaken this in the pecking order. One massive omission from this year’s lineup is 11 times champion Phil Taylor, who has chosen to prioritise his schedule before retirement at the end of the season. Personally, I think it is a pity that ‘The Power’ didn’t say farewell to the event.

Nevertheless, we should be excited about what is coming up. This event is special and popular in two ways. Firstly, it is played in a sets format, as opposed to legs, something most players seem to prefer. Secondly, it is the only major event where players must start and finish on a double (or the Bullseye!). Players do not start scoring until they strike one of those segments in each leg.

Like most tournaments these days Michael van Gerwen comes in as the defending champion and overwhelming favourite. 12 months ago he defeated then World Champion Gary Anderson 5-2 in the final for his third WGP title. MVG has fond memories of this championship as in 2012 he won his maiden PDC major here.

The Dutchman maybe arrives here with a point to prove, though. He comes off a disappointing Champions League campaign where he was eliminated in the Group Stages, and before that he was pumped by Taylor in the Last 8 of the Matchplay.

Had Taylor entered, and the seedings went according to plan, the pair would have meet in the Semi-Finals. As it is now, though, van Gerwen’s top half of the draw looks more favourable, with perhaps a Quarter-Final meeting against compatriot Raymond van Barneveld his trickiest potential test before the final.

The bottom half is headed by Anderson, Peter Wright, former twice winner James Wade and Mensur Suljovic, who is still probably celebrating after his euphoric Champions League victory two weekends ago.

Of that quartet, only Wade is without a TV title in 2017. Struggling for form and results, ‘The Machine’ faces Steve West in Round 1 –  a player who upset Phil Taylor at the same stage here last year.

In fact, there are a number of cracking opening round ties to look forward to across Sunday and Monday in this 32-player schedule.

RVB v Kyle Anderson, Steve Beaton v Rob Cross, Adrian Lewis v Daryl Gurney, Dave Chisnall v Jelle Klaasen and Robert Thornton v Kim Huybrechts are all tasty and should be close encounters. These are all in van Gerwen’s half of the draw.

The World Grand Prix is an event where you do see shocks, although these are more likely in the earlier rounds. The top seeds are more vulnerable with a short-formatted opening salvo – we’ve seen many big names perish at the first hurdle before. That doesn’t mean outsiders become overall winners, though.

There are a couple of unseeded names who could emerge and have a good run in Dublin. Northern Irishman Gurney continues to be upwardly mobile, whilst professional rookie Cross carries on to defy expectations on tour.

Maybe Number 7 seed Michael Smith will fill his potential and reach a maiden major final, or perhaps even win it. The World Youth Champion has come back strongly this season with success on the European Tour.

I did say in my Champions League preview that backing van Gerwen could be dodgy, but I do like him here, especially that his recent nemesis Taylor is out of the way.

Should him and World Cup winning partner van Barneveld meet in the Quarters, that will be a serious, genuine test (as always), but apart from that I like him making the final, and then completing the job.

After recent setbacks he’ll be very keen, maybe even anxious, to get things back on track.

Another high quality PDC event packed with the world’s best players, and another event in which Michael van Gerwen is installed as short a priced odds on favourite. At 4/5, van Gerwen is considerable shorter than second favourite Gary Anderson at 9/2 to take the prize, and yet still punters can’t be put off him. So far MVG accounts for over 50%+ of the money taken, with no one else seeing more than 5%. Interestingly, in the face of the surge of money on a short priced favourite, the next in the market for money taken looks much more like a value bet in the form of in-form Daryl Gurney, installed as a 25/1 shot.

Currently in the form of his life after his win in the Champions League of Darts, Mensur Suljovic will undoubtedly be in with a chance and looks great value at 20/1, especially considering the Double In format which works so well in his favour. The format will also bring  a lot of the rest of the field into play as it tends have a bit of an equalising effect, with players like Adrian Lewis and in-form Rob Cross, both at 40/1, could be worth a few pennies.

Unibet also has a wide variety of markets to enhance the betting experience, with a number of specials and player specific markets also available.