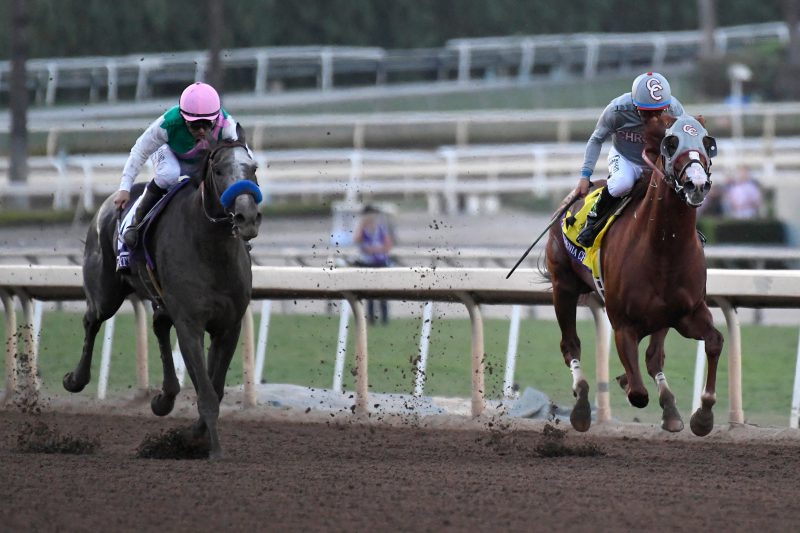 For a racing fan, this weekend has an international feel, with a mix of jumps action in the UK and top grade Flat racing at the Breeders’ Cup.

On Friday there are some good races at Del Mar. Record-breaking trainer Aidan O’Brien might add to his haul of Grade 1 wins this season, as he has some good opportunities.

Happily has leading claims in the Breeders’ Cup Juvenile Fillies Turf. She is a genuine contender, but it is anyone’s guess how she will handle the much quicker ground. Stablemate September may be suited better by the surface.

Later on, Baffert might have the Dirt Mile sewn up, as favourite Mor Spirit and the longer priced Cupid look a cut above the rest. The other races on the card are a bit take-your-pick.

Moving on to Saturday’s races at Del Mar and there are some brilliant horses in action.

In the Filly & Mare Sprint, Unique Bella is a very short price and while I think she is one of the better options in the race there are some speedy rivals in opposition. Finley’sluckycharm and Paulassilverlining are both around 14/1 and offer some appeal at the bigger odds.

In the Breeders’ Cup Filly & Mare Turf, I absolutely love Lady Eli. She’s an excellent mare who heads to the breeding shed after this and in her final race I hope she can sign off with a win.

In the Sprint after that, every man and his dog appear to be on Drefong. It’s worth noting he has previously unseated his rider at Del Mar. Both Roy H and Takaful will be there to pick up the pieces if Drefong messes up, but I suspect he won’t.

The Breeders’ Cup Mile is always an exciting contest and World Approval is just about favourite for it. He seems an improved horse this season and comes in to this after a Grade 1 win at Woodbine.

I actually like the second from that race an awful lot; Lancaster Bomber. He is an under-rated type who has put in some very good performances at the highest level this season, particularly in the St James’ Palace Stakes where he was a very good runner-up. He can go well at a price, although Ribchester has the form to destroy his rivals. This is the last time you’ll see him on the track and after rattling off some impressive Group 1 victories this term, he might just add another.

The Longines Breeders’ Cup Turf is packed full of European chances. Ulysses has run consistently well in Group 1s, Seventh Heaven goes well on quick ground, but Highland Reel is a firm choice here. He’s got the class and the ability on this surface. Last year, he was allowed an uncontested lead and given a masterful ride by Seamie Heffernan and I’m sure this year Ryan Moore will do a great job in the saddle too.

The biggest race is the Breeders’ Cup Classic.

If you’d asked me in June whether I thought anything could beat Arrogate in this then I’d have laughed and said no chance. But since then, the horse who has earned the most money of any equine on the track has come unstuck, losing twice. As such Gun Runner is the favourite, having won his last three races by seven lengths, five and a quarter lengths and ten and a half lengths.

West Coast and Collected are both on winning streaks, while Churchill is a fascinating addition to the line-up making his first appearance on dirt. I’ll take a chance on Arrogate at 11/4.

At his best, there are few horses in the history of racing who would stand a chance against him. His performance in Dubai earlier in the year was one that will live long in the memory of anyone who was lucky enough to witness it. I might be being sentimental, but as he heads towards retirement, I would love to see Arrogate blast the field apart and leave us with the impression that he’s one of the immortal dirt horses. Happy punting.