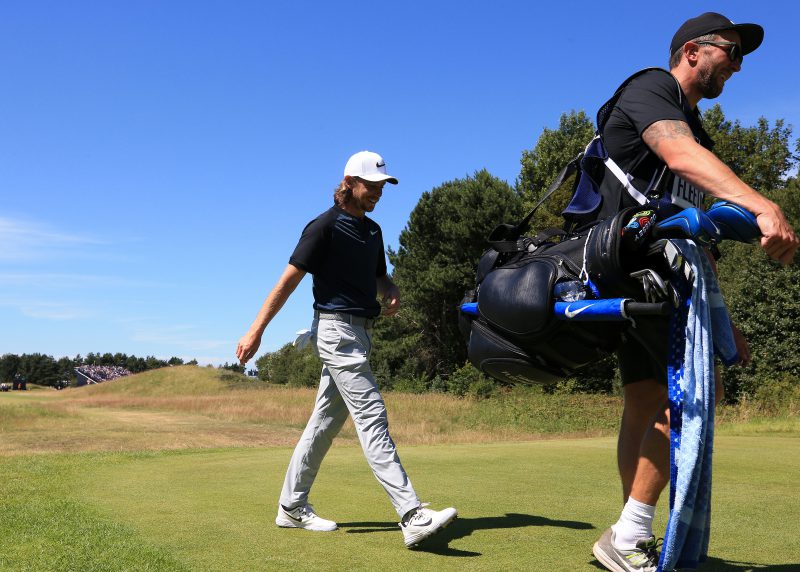 The DP World Tour Championship brings down the curtain on the European golfing season with the Race to Dubai culminating this weekend.

The tournament, taking place on the Earth Course at the Jumeirah Golf Estates in Dubai, will decide the Race to Dubai champion.

The Race to Dubai is the European Order of merit and the winner lands the Harry Vardon Trophy, and this year is down to three players for the title.

Current leader is Tommy Fleetwood, who needs to hold of compatriot Justin Rose – who is looking for his second Race to Dubai win – and Masters champion Sergio Garcia. Defending European Tour champion Henrik Stenson, is not in the running to retain his title.

The DP World Tour Championship is the 48th tournament of the European season, and the defending champion is Matthew Fitzpatrick – but most eyes will be on Fleetwood, Rose and Garcia.

Fleetwood is in pole position to take Europe’s top golfing prize, and he insists he is not feeling any pressure.

“It’s actually an amazing opportunity and it’s a massive privilege,” said the 26-year-old from Southport.

I’m turning up tomorrow, final event of the year, and playing with Justin Rose trying to win a Race to Dubai. Sergio could win it, as well. Sergio, Justin Rose and then me: that’s pretty cool, that.”

Fleetwood’s nearest rival is world number six Rose, who is coming into the tournament in wonderful form having won the WGC-HSBC Champions title in Shanghai and the Turkish Airlines Open in recent weeks.

“I ticked all the boxes that I wanted to last week, and I’ve arrived here in Dubai, fresh, ready to go, excited. Those are the main ingredients, really, for playing well.

The third man in contention is Garcia, but he does not see himself as having a major chance of being Europe’s number one.

“What I’m going to do is go out there and try to do the same as every other week, which is play the best I can and give myself the best option of winning this week,” said Garcia.

“I can’t control what other people do. Tommy and Justin are playing really well.

“So I’m not expecting them to finish 40th or 50th. To be totally honest, I see a 2% chance of me winning the Race to Dubai. But I’m fine with it, I can live with it. It has been a great year and that’s not going to change.”

Away from the bright lights of Dubai, and the PGA Tour rolls into Georgia for the RSM Classic at the Sea Island Golf Club.

The new American season is back in full swing and big names such as Matt Kuchar and Kevin Kisner will be featuring.

The defending champion is Canadian Mac Hughes – who is back to try and reclaim his title.

“It was my ninth ever start on the PGA Tour, fifth as a member and (the whole week) I was calm, I had the lead and after the first day, I just kept to my same routine,” said Hughes.

“Something about that week, everything was just how it needed to be. My mind was in the right place.”

So let’s look at America first, I don’t see how Kevin Kisner doesn’t feature here – having won the event in 2015 and he has had a wonderful 12-months.

Then we have the big event in Dubai – always a great event, for me I think Ty Hatton could win the event pushed by Jon Rahm. Overall I think Justin Rose might sneak the order of merit.

The European Tour enjoys another week in the sun when the final event of the Race to Dubai takes place in – surprise surprise! – Dubai, starting on Thursday.

With a huge prize on offer, there is a phenomenal field gathered at the Greg Norman-designed course, and just one man can be backed at single figure odds – Justin Rose at 7/1.

After winning back-to-back tournaments, the Englishman is one of only three who can win the Race to Dubai. His R2D rivals, Sergio Garcia and Tommy Fleetwood, are 11/1 and 22/1 respectively.

It’s exceedingly hard to look beyond the top of the market with all course form pointing to a fancied runner winning the tournament – last week’s winner Branden Grace has three top-10s, compatriot Charl Schwartzel four, the same total as Francesco Molinari.

There’s loads of course form to study in the US, as the PGA Tour goes back to Sea Island for the RSM Classic, a tournament first staged in 2010 (though formerly known as the McGladrey Classic).

Kevin Kisner, 16/1, heads up a very open betting field this week, so it’s a good thing the Betfair Sportsbook is paying seven places. We identified Charles Howell as one to follow last week and he rewarded with a fourth place and he brings strong course form to this week’s test – three top 10s highlighting his suitability to the seaside track. At 25/1, Howell looks a solid play at the top of the market.

At a much bigger price, John Oda built on his very promising college career to finish eighth on his PGA Tour debut last week. The Hawaiian is 150/1 to win this.