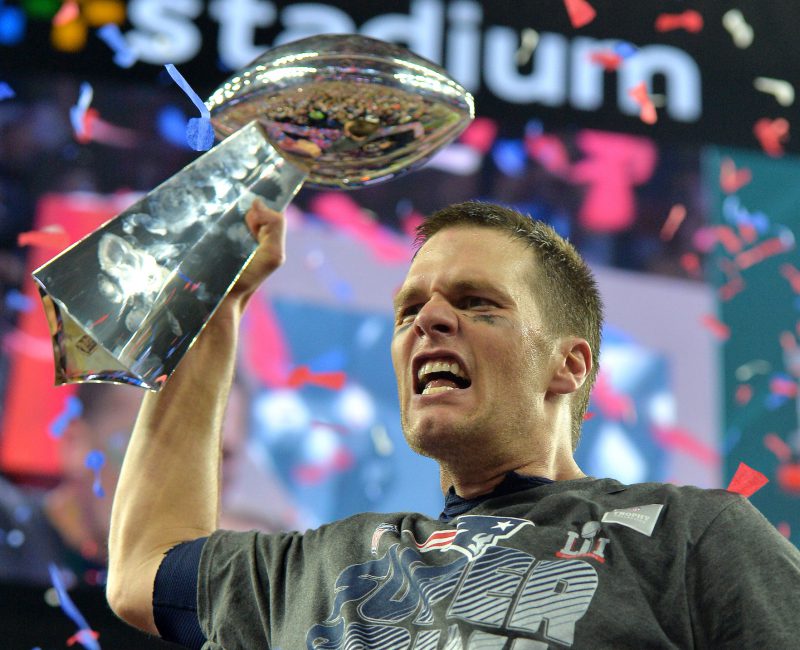 Tom Brady celebrates with the Lombardie Trophy at Super Bowl LI at the NRG Stadium in Houston, TX, USA, on February 5, 2017. Photo by Lionel Hahn/ABACAPRESS.COM

Super Bowl LII takes place in Minnesota on Sunday with New England Patriots looking to defend their crown as the Philadelphia Eagles look for their first ever title.

One of the biggest sporting spectaculars on the planet, the game will be watched by over 150 million people worldwide and it will be played in the US Bank Stadium – one of the greatest sporting arenas in the world.

.@usbankstadium is a masterpiece pic.twitter.com/YN6zO3QCZQ

The Patriots, who have appeared in a record breaking 10 Super Bowls, are firm favourites to claim their sixth title which would put them equal all-time with the Pittsburgh Steelers.

However, this New England team is already something of a dynasty under head coach Bill Belichick and quarter back Tom Brady with five Super Bowl wins, making them the greatest head coach-quarter back partnership of all time.

Should Brady win on Sunday he will become the first player in history to win six Super Bowls. Belichick is already the most successful coach in NFL history.

40-year-old Brady has been quizzed about his future, but the GOAT (Greatest of All Time) feels he has a few more years left in him.

“I’ve always wanted to play to my mid-40s, so we’ll see,” he said. “Football is such a physical sport. Every game could be your last game, that’s the reality of the sport.

“We’re playing against a great football team. So I’m not thinking about retirement. I’m thinking about the Super Bowl and trying to win the most important game of the year.”

Philadelphia are looking to make it third time lucky, after their two previous Super Bowl appearances.

Whilst the Patriots are favourites, The Eagles come into the game with a 15-3 record from the season, the same as New England.

Most on-lookers felt the loss of star quarter back Carson Wentz to injury before the play-offs would cost them, but back up Nick Foles has performed admirably to guide his side to the Super Bowl – indeed he has recorded the highest passer rating in post-season history.

Coach Doug Pederson insists that despite the formidable opposition, his side are ready to go for glory.

“I just think you can’t get caught up with who’s on the other side,” he said

“Everybody in the NFL is good. Every team is good. I’ve always believed you just go about your business. You prepare. You get your team ready to go every week, and you treat it that way,” he insists.

“It’s about doing your job. That’s a phrase Bill uses all the time: Do your job. That fits with the faceless opponent. Do what you’ve been coached to do this week for 60 minutes. Win your matchup, the one-on-ones, and let’s see what happens after 60 minutes. Nothing else matters, so why introduce anything else?”

“All the money has been for the Patriots to cover the spread as they are putting in their faith in Tom to deliver again on the biggest stage,” said Hill.

“In terms of our prop bets, punters are backing Pink to sing the national anthem for longer than 2 minutes, while Can’t Stop The Feeling is the favourite to be Justin Timberlake’s opening song in the half-time show.”

Over the course of the season – John, along with our own Graeme Bailey, and Pete Koury, an executive Sports Producer for America’s biggest radio station SiriusXM, have been delivering their verdicts every week on the NFL.

And well, for the first time in the whole season, all three of our guys are in agreement – Patriots win!