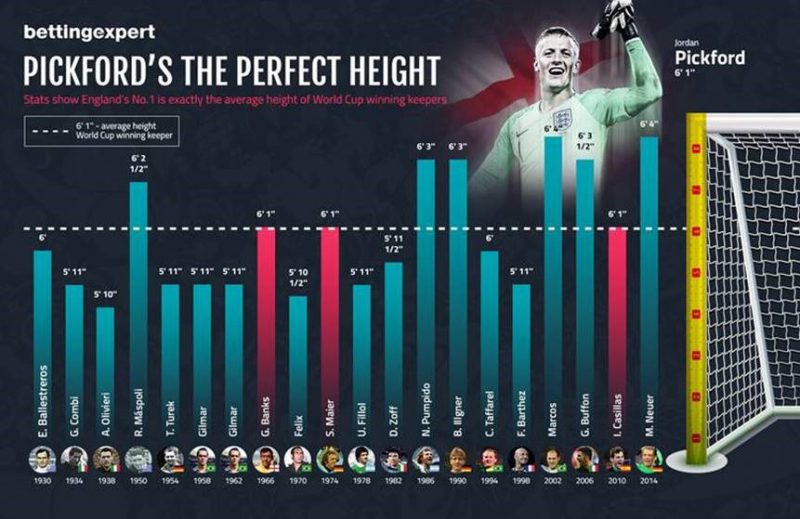 Standing at 6’ 1’’, England’s No.1 Jordan Pickford is the perfect height to be keeping goal at the World Cup, standing just as tall as the average tournament-winning goalkeeper down the years, according to research from bettingexpert.com

The Everton man is the same height as England’s only other World Cup winning goalkeeper, Gordon Banks, which stands him in good stead to follow in those victorious footsteps.

Banks stood three centimetres taller than his West German World Cup final counterpart in 1966, while Pickford will be conceding seven centimetres to Swedish goalkeeper Robin Olsen on Saturday, but the England man has demonstrated that he has what it takes despite his relatively small size.

Sepp Maier, who went all the way with Germany in 1974, shared Pickford’s height, as well as modern goalkeeping legend Iker Casillas, who triumphed with Spain eight years ago.

Pickford’s heroics between the sticks has given England a healthy chance to book a semi-final place for the first time since 1990, despite being the joint-shortest goalkeeper left in the tournament.

Having analysed all winning goalkeepers in World Cup history, their average height comes to 1.85m which means that Pickford fits the bill exactly and could be the Three Lions’ lucky charm in more ways than one.

The shortest goalkeeper to ever win a World Cup final was 5’10” Italian Aldo Olivieri in 1939, while Manuel Neuer and Marcos, of Germany and Brazil, towered at 6’4” as the tallest.