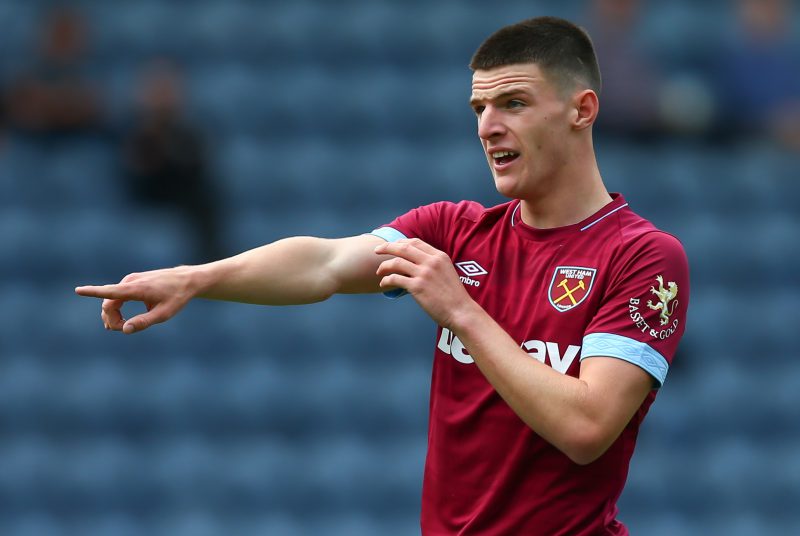 Declan Rice has his pick of Premier League clubs, should he decide that his future is not at West Ham United.

The 19-year-old defender, who can also operate in midfield, had his breakthrough season last term – starting 15 games, but he failed to start this campaign under new Hammers chief Manuel Pellgerini.

However, West Ham’s up-turn in fortune in recent weeks has coincided with Rice’s recall – but club sources are now worried that they could lose one of their prized assets, after he turned down their latest offer of a new contract.

Rice’s current deal is due to expire at the end of the season, although West Ham insist there is a clause that allows them to extend – even if the player does not want to stay, but if a new deal is not agreed, it would make it increasingly hard for him to stay.

Rice, who joined the Hammers youth system at 14 after being released by Chelsea, is now being checked on by his former club, but I understand Manchester City are tracking him, along with Tottenham, Arsenal, Everton and Wolves.

As well as his club future, Rice is also the subject of a battle on the international front. Rice has already played senior football for Republic of Ireland, but the London-born ace has only played friendlies, and now England are looking closely at him and are ready to hand him a call-up in the coming months.

Bookmakers believe Rice could be heading to the exit door, with Tottenham currently considered the favourites.

Alex Apati of Ladbrokes said: “Rice has been a standout player in a campaign where West Ham are yet to get going, so it’s no surprise to see a handful of top clubs interested in the youngster.”