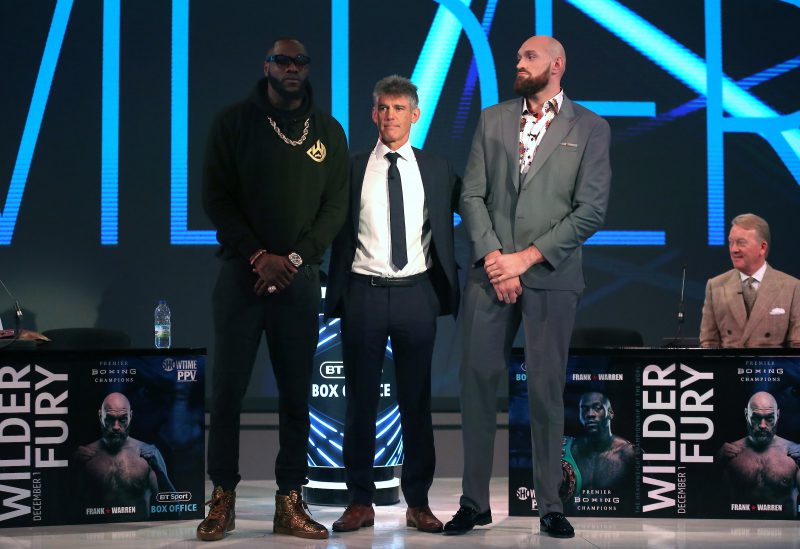 Deontay Wilder is odds-on to beat Tyson Fury, as the two have begun their publicity tour ahead of their big clash in December.

Lineal champion Fury will take on WBC belt holder Wilder, and will clash at the Staples Center in Los Angeles on December 1.

Fury, who made his comeback to the ring earlier this year, is relishing the prospect of taking on Wilder.

“I am the lineal heavyweight champion of the world. That means I am the best of the best, the elite champion. This is two champions colliding, I am challenging for nothing or nobody, this is equal rights champion vs champion,” he said.

“I am in the mood for no messing and no running around rings and dancing from nobody. There is not a 15st man on the planet that can beat Tyson Fury and I will stand and prove what I will do to this idiot. I will punch his face right in for him, not a problem, seven days a week and twice on a Sunday.

“If we fought 30 times I’d win 30 times. That’s how confident I am of beating Deontay Wilder. No problem.
For all your knockout power, ten men in the ring on the night wouldn’t beat Tyson Fury. I have looked into a killer’s eyes and I am looking at a pussy cat, not a killer.”

Equally Wilder is in confident mood of taking out the undefeated Fury.

“It is very important for me to establish dominance. I say so many things in this sport, I say I am the best, I say I hit the hardest and that I am the baddest man on the planet.  And I believe every word that I say,” he said.

“When I say I’m going to knock a man down it comes to pass. So when it comes to Tyson Fury I am all about devastating knockouts, that’s what I do. There is no pressure on me to do anything because I know what I’m going to do.”

Bookmakers see the fight being close, but Wilder is the narrow favourite. Fury is 6/5 with Coral to beat Wilder – who is 4/6 to retain his belt.

“We’ve been knocked over with interest in Fury over the last couple of days and although he is the slight underdog in the latest betting ahead of his big showdown in Vegas, punters feel he can inflict the first defeat on Wilder’s professional career,” said Coral’s John Hill.