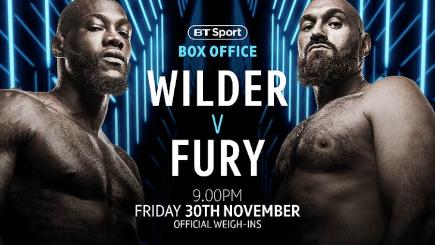 Deontay Wilder is odds-on favourite to retain his WBC world title as he takes in Tyson Fury in Los Angeles this weekend.

30-year-old British fighter Fury is looking to make what would be regarded as one of the greatest comebacks in sporting history.

The ‘Gypsy King’ is just six-months into his return to the sport having spent more than two-years away following a bout of depression and a subsequent drugs ban.

Fury, who remains undefeated, is now looking to return to the top of the boxing world as he takes on Wilder for his belt, with Anthony Joshua the holder of the other titles.

33-year-old Wilder, also undefeated, is more than confident of being the first man to beat Fury.

“I feel like I’m at my very best right now,” Wilder said.

“Mentally, physically and emotionally I’m ready to go. Everything is perfect. I just want to get in the ring and show action. Tyson Fury doesn’t know what he’s gotten himself into.”

As confident as Wilder is, unsurprisingly – Fury is equally so, saying: “It’s alright having massive, massive power but if you can’t land it, you’ve lost. Wladimir Klitschko had massive power – ‘Dr. Steelhammer’. He had one of the biggest punching right hands in the history of boxing and he did land it but not effectively and not cleanly because I’m always riding the shots.

“I don’t walk square on, I don’t rush, I take my time. Cool, calm, collected and calculated, thinking about my job.

“I’m very awkward to land on and I’ll give Wilder his credit but I’ve not got a glass chin. I can take punches and I’ll be there to fight. I’m not going to be there to play games. I’m going to make him miss and make him pay.”

Bookmakers are reporting heavy interest in Wilder. Fury is 5/4 to prevail. The defending champion, Wilder, is 4/6 to retain his title, while the draw is 25-1.

“Despite being the outsider in the fight betting, it has been all one-way traffic for Tyson Fury as punters are convinced he is going to upset the odds once again and win a world heavyweight title for the second time in his career,” said Coral’s John Hill.