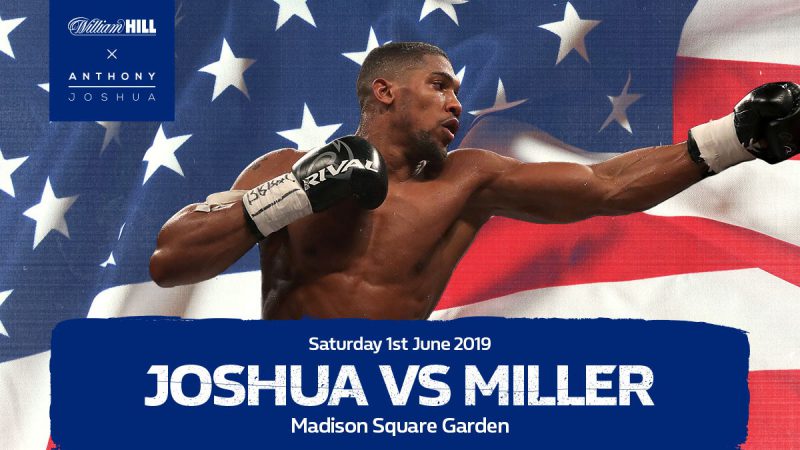 Anthony Joshua will fight in America for the first time in June against Jarrell Miller when he defends his IBF, WBA and WBO world heavyweight titles.

Joshua said: “I am heading to the Big Apple and I plan to embrace the culture and leave with an appetite for more.

“It has been an honour and a blessing to fight at some of the best venues in the world and at home in the UK, not least Wembley Stadium, but the time has come to head across the Atlantic and defend my heavyweight titles in the USA.

“I am looking forward to taking on another challenge with a good boxer and a brilliant talker. It will be an exciting fight. I will leave nothing to chance and plan on dismantling Miller in style to make my mark.”

Miller added: “AJ is making a huge mistake coming over here to fight me in my own backyard – he’ll be leaving New York empty-handed.

“This is the fight that I’ve been chasing all my life and on 1 June I’m going to achieve the thing I was born to do.”

William Hill, for whom Joshua is global ambassador, make him 1/8 favourite to emerge victorious.

AJ is expected to wow the crowd in his first fight outside the UK as a professional and he is odds-on at 8/15 to win the fight by knockout and 9/4 to do so by decision.

“In his first foray outside the UK, AJ is expected to bag a victory and it could well be over in a New York minute,” said William Hill spokesman Joe Crilly.