The 2019 Unibet Premier League’s regular season concludes final league at the First Direct Arena in Leeds on Thursday, where four players are vying for the final two Play-Off places.

The tightest ever league phase will reach its climax in Yorkshire in arguably the most pivotal night of league action in the competition’s 15-year history.

James Wade, Mensur Suljovic, Daryl Gurney and Gerwyn Price all still harbour hopes of making it to The O2 on May 23, while Rob Cross and Michael van Gerwen are battling it out for top spot and the £25,000 league leader bonus.

All four games will have a bearing on the final finishing positions on a crucial night of action, beginning when sixth-placed Gerwyn Price takes on Peter Wright – who sits eighth – in the opening game of the night.

Welshman Price must win or draw to keep his Play-Off hopes alive and then hope results go his way later in the night, and the Grand Slam of Darts Champion is hoping he won’t be left ruing missed chances amongst six draws this season. The focus then moves to fifth-placed Daryl Gurney, who takes on already-eliminated Michael Smith and knows that he must better the results of Price and Suljovic.

The Northern Irishman pinned a pivotal double 16 with his last dart in hand against Price in Sheffield to take a big step towards making his Play-Offs debut.

Fourth-placed Suljovic competes in the third tie of the evening, against Van Gerwen, and knows that he must better the results of Gurney and Price in their earlier games.

​Third-placed Wade will qualify with a win or a draw from his tie with Cross in the night’s final fixture, although if Gurney or Suljovic fail to win then the 2009 champion will have qualified for the Play-Offs before throwing a dart.

Cross moved a step closer to joining Phil Taylor and Van Gerwen as the third player in history to top the league phase with an 8-4 victory over Suljovic in Sheffield last week, and a win over Wade would guarantee a finish at the top of the pile.

In doing so, the former World Champion would end Van Gerwen’s record of topping the league phase every year since his 2013 debut, while also pocketing the £25,000 bonus for topping the standings.

Meanwhile, Van Gerwen will be aiming to put the pressure on Cross in their battle to top the final league table in his meeting with Suljovic.

The Dutchman sits a point behind Cross but has superior leg difference, so would move top with a draw ahead of the 2018 World Champion’s meeting with Wade in the final tie in Leeds. 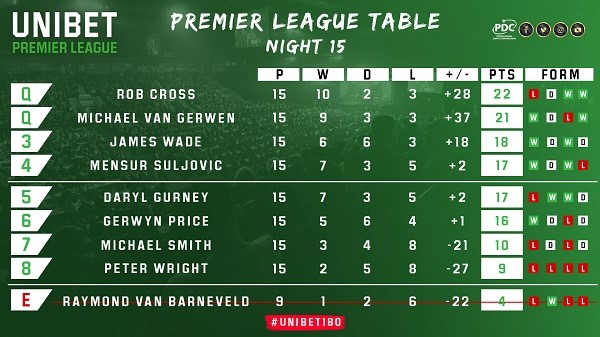 James Wade
Qualifies with a win or a draw.
If Gurney or Suljovic do not win, Wade has qualified before playing his match.