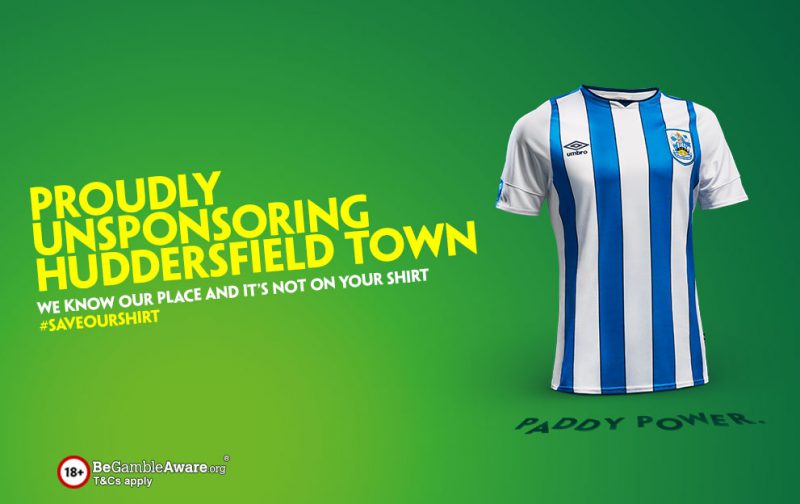 Paddy Power have announced that their controversial ‘sash’ sponsorship of Huddersfield Town was just a prank – as they reveal the actual shirt the team will wear this season.

Despite expectations that the bookie would simply reduce the extravagant logo in size, they have instead removed it entirely.

That’s because Paddy Power are today launching the ‘Save Our Shirt’ campaign, where they are calling on brands to stop sponsoring football shirts – including fellow betting companies.

The intention of Paddy Power’s hoax jersey was to shine a light on the issues around shirt sponsorships – given the coverage and criticism of the sash, they’re clearly not alone in recognising the problem.

This season, more than half of the teams in the top two divisions will be sponsored by a bookmaker – with 14 Championship teams bearing a betting brand’s logo.

As a result, Paddy Power have relinquished the space on the front of the Huddersfield Town shirt, which they would be due as title sponsor, and are encouraging others to do the same.

Paddy Power MD, Victor Corcoran, said: “Shirt sponsorship in football has gone too far. We accept that there is a role for sponsors around football, but the shirt should be sacred.

“So today we are calling on other sponsors to join the Save Our Shirt campaign, and give something back to the fans.

“As a sponsor, we know our place, and it’s not on your shirt.”

As part of the campaign, Paddy Power are setting up a ‘shirt amnesty’ outside Huddersfield Town’s first game of the season – at home to Derby County on August 5th – where they will give out 500 unbranded Huddersfield Town jerseys, in exchange for older, branded versions.

They have also donated their sponsorship of the club’s training kit to the Huddersfield Town foundation.