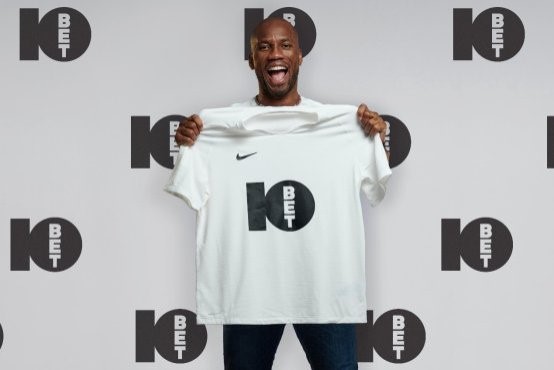 10bet is one of the world’s fastest-growing online sports betting brands and has just announced a two-year partnership with football superstar Didier Drogba to become its new Global Brand Ambassador.

10bet has created the most user-friendly sports betting and casino experience in the market. As one of the world’s most visible challenger brands, 10bet’s endorsement by Drogba, among sport’s most legendary winners, cements its drive to continue conquering the online sports and casino marketplace.

After an illustrious career winning multiple major honours, including four Premier League and FA Cup titles and the coveted Champions League trophy with Chelsea, and twice being named African Player of the Year, Drogba will partner with 10bet continuing to pursue his passion for sport.

10bet’s new and exciting campaign has launched today across all its social platforms, including its YouTube channel. Click here for an exclusive preview of the video featuring Drogba as you’ve never seen him before – the ultimate big game fan.

The former Chelsea and Ivory Coast international announced the move via a personal video on his social media page. He’ll star in the company’s global marketing campaigns to promote the brand in the UK and Asia, as well as making special appearances at major live events.

Didier Drogba said: “I am excited to be partnering with 10bet on this campaign, and like that they promote responsible gaming. We had a lot of fun filming the ads which you will see very soon.”

A 10bet spokesperson said: “Didier is one of the most successful and popular sports stars in the world. His career record of scoring 10 goals in 10 finals and winning 10 trophies at club level earned him the name “the ultimate big game player,” making him a natural fit for our partnership. His passion for the game will be invaluable as he joins us at 10bet in a new challenge off the pitch.”