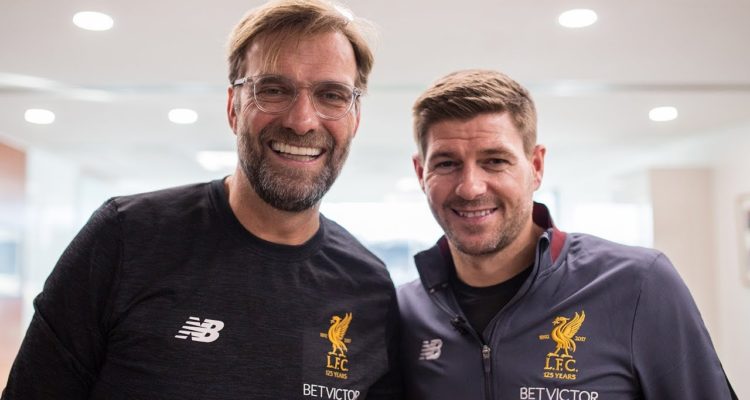 Steven Gerrard is firm favourite to be next man in the Liverpool managerial seat, after current incumbent Jurgen Klopp revealed his backing for him.

There is no danger of Klopp leaving Anfield anytime soon, but his agent has admitted that a new long-term deal is not certain – mainly thanks to the English weather, and the likes of Real Madrid and Barcelona are constantly linked to the former Borussia Dortmund boss.

Now Klopp has admitted in an interview that as it stands, Gerrard would be his likely replacement.

If Liverpool were to sack me tomorrow, then maybe Kenny [Dalglish] would be the first choice to replace me, but they would probably bring Stevie down from Glasgow,” he told FourFourTwo.

“If you ask who should follow me, I’d say Stevie. I help him whenever I can. If someone gets your job, it’s not about them, it’s about you not being good enough.”

This was backed up by Gerrard’s own assistant Gary McAllister – himself a Liverpool legend in his own right.

“That’s surprising in some ways. But then in other ways, when you look at it, it probably makes a wee bit of sense,” said McAllister.

“But when that’s going to happen [I don’t know]. Jurgen looks as if he’s going to be there quite a while. I think it’s a huge compliment but I can assure you that Steven is absolutely fully focused here and trying to win something here.”

Bookmakers already firmly believe that Gerrard is the man most likely take over the reins.

Gerrard is currently Evens favourite with PaddyPower to be the next Liverpool boss, with another former Reds midfield star second favourite in the shape of Xabi Alonso.

“Gerrard has seemed destined for the Liverpool job for a long time – so he can resume his long running pursuit of the Premier League title,” Paddy Power explained.

“He’s getting good experience with Rangers – of finishing second to a far richer rival.”

Odds on next Liverpool boss