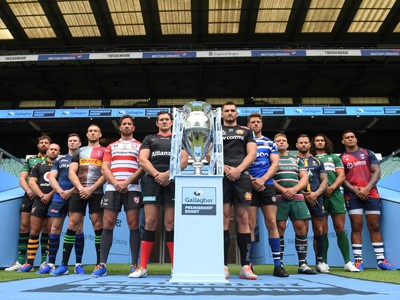 In the shadow of the Rugby World Cup knockout stages, Gallagher Premiership Rugby returns this weekend with a host of rising stars seeking to make their mark on the domestic scenes before the introduction of the global superstars from November.

A global showpiece will always outshine the domestic game, making for a slovenly start to the Gallagher Premiership in terms of attendance and viewing figures, but once all sides are back at full strength it promises to be another blockbuster season with a host of international superstars making the move to the Northern Hemisphere post-World Cup.

Saracens are the defending champions having come from behind to defeat Exeter Chiefs in an epic Twickenham encounter back in May, but it is all back to square one, but Mark McCall’s Barnet-based boys remain favourites to retain the crown.

London Irish are back in the top flight and always have a tendency to start strong, but will be among the favourites to return back to the Championship, alongside Worcester Warriors.

We spoke to Coral’s Harry Aitkenhead to get his opinion on the season.

“The betting for the 2019/20 Premiership is all about one team again and we make Saracens odds on to win it again. Exeter have topped the regular season pile for the last couple of seasons and they’ll be hoping to go one better this time around and are 5-2 for punters who want to take on the reining champs. It’s 14-1 bar those and it does seem hard to make a case for them not finishing as the top two of the league campaign.

“Sale are the interesting runner from a betting point of view, and their price has collapsed in recent weeks down to that 14-1. They finished outside the top six last season but have strengthened significantly and should come off better than others with the internationals in Japan.”

Below Ben delivers his verdict on the new season with odds provided by Coral.

The 2018-19 saw Bath Rugby plagued with injuries to key players Anthony Watson, Semesa Rokoduguni and Jonathan Joseph, which in a rollercoaster season ultimately saw them falling short of the knockouts with a sixth place finish.

Making the Gallagher Premiership semi-finals will undoubtedly be top of Stuart Hooper’s wish list and with the like of Ruaridh McConnochie and Zach Mercer rising to the fore they have a very strong chance of making the grade.

Although ninth may not sound like the most encouraging return last season, Bristol Bears made an impressive start to their stay in the English top flight and we can expect more of the same this time around.

The arrival of barnstorming No 8 Nathan Hughes from Wasps Rugby and former England lock Dave Atwood from Bath add real strength up front for the Bears, who have a realistic chance of a top six finish this season.

2018/19 Gallagher Premiership runners-up Exeter Chiefs will be there or thereabouts once again, as they remain, alongside Saracens in a league of their own at the head of English domestic rugby.

Rob Baxter has built incredibly well over the years and has enjoyed silverware with the Chiefs, but ending the hex of Saracens dominance remains the core aim of the Devon-based squad, who boast a wealth of international talent once the likes of Luke Cowan-Dickie, Henry Slade, Jack Nowell and Alex Cuthbert are back available.

Johan Ackermann guided Gloucester Rugby a third-place finish in the Gallagher Premiership last season, much to the delight of The Shed faithful at Kingsholm, but a lack of recruitment this summer could see them struggle in 2019-20.

Danny Cipriani remains the leading act in the Cherry and Whites outfit, but a successful season cannot be predicated on one man alone and Gloucester may become vulnerable should injuries hit.

After struggling to transition Harlequins returned to the top half of the Gallagher Premiership standings with a fifth place finish last season and the addition of fresh attacking power could see them threaten for a semi-final berth in 2019-20.

Italy flyer Michele Campagnaro joins the ranks alongside Fijian winger and serial Premiership Rugby try-scorer Vereniki Goneva, giving Quins a wealth of firepower to break defences across the top flight, but the primary question remains; can they protect their own fort?

After finishing second from bottom last season and narrowly avoiding relegation, Premiership Rugby stalwarts Leicester Tigers will be desperate to press back up the domestic pecking order.

Although there have been 22 new additions to the squad this summer, including academy graduate, there is still little sign of promise for the Welford Road faithful to latch onto and they could be in for another torrid season of emotion.

Replacing Newcastle Falcons in the top flight following their relegation last season are London Irish, but they are no strangers to the Gallagher Premiership, having bounced between promotion and relegation in recent seasons.

However, seeking to following in the footsteps of Bristol Bears and retain Premiership status, the Exiles have recruited well and the likes of Allan Del from Edinburgh Rugby, Paddy Jackson at fly-half and former All Black Nehmani Nadolo will all offer hope to the Madejski Stadium crowds.

Semi-finalists in 2018-19, Northampton Saints were back in the higher mixes of Gallagher Premiership activity, but can they continue to build on such success and progress a stage further?

Defeated in the last four, Saints have not been back to Twickenham for a final since their Premiership victory in 2014, but with James Haskell’s retirement and Luther Burrell opting to switch to rugby league, have their ranks been left a star quality player short?

Steve Diamond’s project to see Sale Sharks get to the top table of Gallagher Premiership Rugby continues, but with an influx of South African talent to join compatriot Faf de Klerk and the likes of the Curry brothers, Denny Solomona, Chris Ashton, they have a real shot.

Seventh place last season was not representative of the progress made by Diamond and the AJ Bell Stadium will see a host of victories this season, with tries aplenty locked in this squad, but can they break into the top four remains the key question.

Defending champions and those who reign supreme; Saracens completed a European domestic double last season and few would bet against them replicating the same feat once again this season.

They have only strengthened their ranks with the addition of England back Elliott Daly to their ranks alongside their host of international talents with the likes of Owen Farrell, the Vunipola brothers, Maro Itoje, George Kruis all set to make a big mark yet again.

Last season saw Wasps, 2017-18 semi-finalists, lose their sting as they landed eighth in the Gallagher Premiership and hopes will be no higher this season given the collective strength of the field.

All Black Malakai Fekitoa has been drafted in from Toulon as a showpiece signing, but while he has many tries to score, Wasps lack strength in defence and could be seriously exposed.

Worcester managed to retain Gallagher Premiership status last season, but only by virtue of Leicester and Newcastle both being utterly dreadful; this year the field is much more competitive and their changes of survival are slender.

They have recruited, but Leicester Tigers stalwart Graham Kitchener is the pick of bunch, which shows the lack of bite in the Warriors squad – it will be a long old season at Sixways.