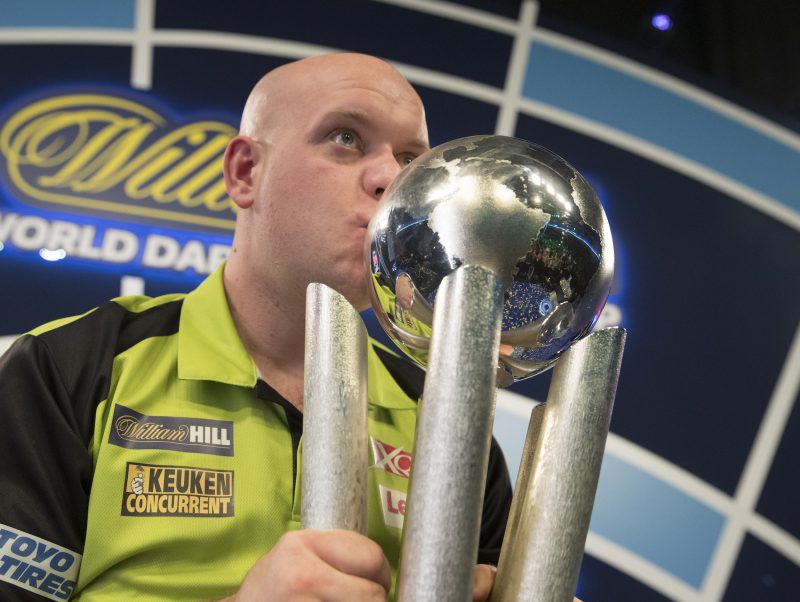 Darts’ biggest event will see 96 players competing across 28 sessions of action from December 13-January 1 for The Sid Waddell Trophy and £2.5m in prize money.

The tournament will be broadcast live on Sky Sports in the UK, on PDCTV-HD for Rest of the World Subscribers and through the PDC’s worldwide broadcast partners including DAZN and RTL7.

The festive feast of darts begins on Friday, with former World Championship semi-finalist Klaasen facing Northern Ireland’s Burness in the opening tie for the right to face Van Gerwen in the final game of Day One.

Van Gerwen tasted victory on the Alexandra Palace stage for a third time 12 months ago, but the world number one insists there is no extra pressure on him to claim back-to-back World Championship titles for the first time.

A winner of seven TV titles in 2019, Van Gerwen could pocket £1m in World Championship prize money in the space of 12 months if he clinches the £500,000 top prize for a second successive year and he is who is the 5/4 favourite to lift The Sid Waddell Trophy with title sponsor William Hill.

The first round will be played across the opening 11 sessions, featuring 32 qualifiers from the ProTour Order of Merit – based on prize money won across 43 non-televised events in 2019 – and 32 International Qualifiers.

Among the players in round one action is five-time World Champion Raymond van Barneveld, who will face American veteran Darin Young in the opening game of the Dutch legend’s farewell tournament before retirement.

Van Barneveld is one of two players to hit two nine-dart finishes at the World Championship, and if a player hits two perfect legs at this year’s event they will receive a £100,000 bonus.

Each session of first round action will also feature a second round clash, with the 32 seeded players waiting to face the first round winners.

Among the seeds and highly tipped to go far in just his sixth World Championship is world number three Gerwyn Price – who has never previously won past the last 16 at Alexandra Palace.

The Welshman’s best year in PDC darts, which included the retention of the Grand Slam of Darts title and two other televised finals, has led to him being touted as a potential winner of the World Championship on New Year’s Day.

One of the 22 debutants at this year’s event is Middlesbrough’s Glen Durrant, who is hoping to crown a ‘dream’ first year in the PDC with the biggest title of all.

Durrant, who won his PDC Tour Card in January after lifting his third Lakeside Championship, has reached the semi-finals of three televised events in his debut campaign and is now targeting the best possible end to the year.

The World Championship has changed the lives of many players, none more so than Nathan Aspinall, who is drawing on memories of last year’s incredible run to the semi-finals to spur him on to further success.

A 500/1 shot going into last year’s World Championship, Aspinall enjoyed a sensational Alexandra Palace debut and has since won the UK Open and US Darts Masters in his rise to 12th in the world.

The third round is split either side of the Christmas break, with the fourth round being played on December 27-28 ahead of the quarter-finals across two sessions on December 29.

The semi-finals on Monday December 30 will be followed by the final on Wednesday January 1 as sport’s first World Champion of 2020 is crowned after 16 days and 28 sessions of action.

A tie-break will be in operation in all round from the second round onwards, where the final set must be won by two clear legs. If the score reaches five-all, the 11th leg will be a sudden-death leg.