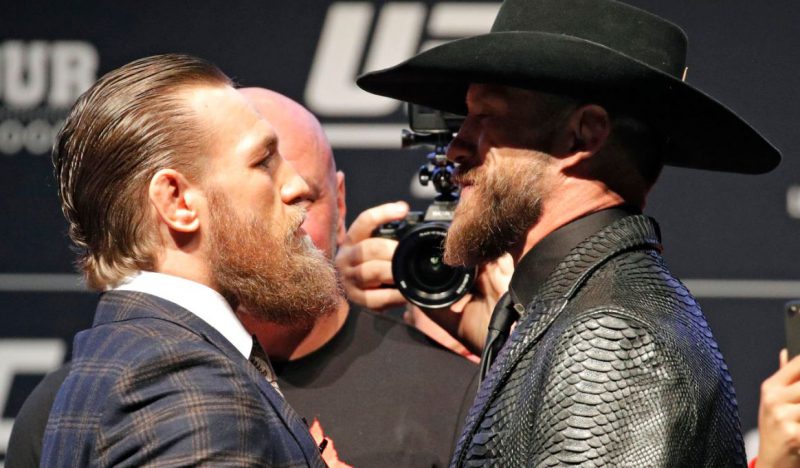 The 31-year-old Irishman has not fought in mixed martial arts since losing to his arch-rival Khabib Nurmagomedov in 2018.

And a rematch with the Russian will be waiting for McGregor, if he beats Cerrone as expected.

“He’s been chomping at the bit for the Khabib rematch. I think it’s no big secret,” said UFC chief Dana White.

“If he wins this weekend, he’ll get that shot at the title and it will be the biggest pay-per-view ever in UFC history.”

And McGregor is expecting to bounce back in fine style and take victory against Cerrone – known as the Cowboy.

“Sometimes we have to go to certain places in our life to realise what we need to do,” the former two-weight UFC world champion added.

“I have turned over a new leaf. I feel the same young man but I feel re-energised and refreshed. I’m still a passionate young man, still reaching for the stars and aspiring to do things that have never been done before.

“There is no one who can touch me. I made this game what it is, so I am going to go in there and remind everyone.”

And Bookmakers are of little doubt who is going to win the UFC 246 bout.

Cerrone is the 9/4 outsider with BoyleSports, who make McGregor a hot 1/3 favourite for the headline event in Vegas this weekend.

An explosive comeback for McGregor is also all the rage, with a first-round victory just 15/8 and a knockout within 60 seconds of the opening bell proving popular at 20/1.

McGregor is the 4/9 favourite to land the most significant strikes in the contest, which is a red-hot 1/6 shot not go the distance.

Lawrence Lyons, spokesperson for BoyleSports said: “It’s safe to say punters aren’t anticipating any rustiness from Conor McGregor this weekend because they’re getting behind him in big numbers to win in style.

“The opening round is the most popular pick of all rounds for a McGregor victory and we’re even seeing some optimistic punts at 20/1 that he does it within a minute.”