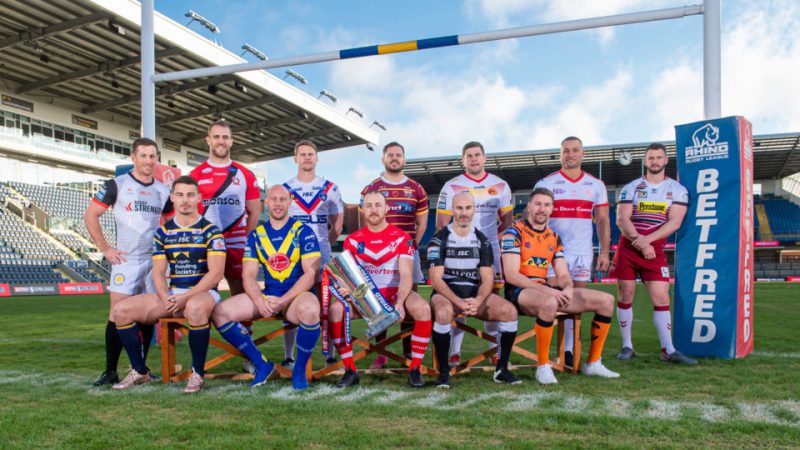 The new Betfred Super League season is nearly here, will St Helens repeat their glory of 2019 with a new head coach? We preview the campaign with title sponsors Betfred.

Betfred’s Owen McMahon helps look through every team in the 2020 Super League…beginning with the defending champions, who are favourites to win the Grand Final again.

Betfred says: Saints are outright favourites to retain their title, and rightly so. They were dominant last season, and there are very few weaknesses in their squad. The biggest change at the Totally Wicked this year is at the top, with Kristian Woolf taking over from Justin Holbrook. Will they be as dominant without him? That’s the question they have to answer, and with the ability their squad retains it’s likely the answer will be ‘yes’.

Betfred says: Wigan have started the last two seasons fairly slowly, but finished with an incredibly strong charge that’s led to a Grand Final win and a play-off semi-final. If they can break that pattern and start strongly from the word go this season, there’s no reason why they won’t be challenging the entire way. It’s going to be exciting to see what impact Man Of Steel Jackson Hastings has at his new club too.

Betfred says: Warrington were a huge threat to St Helens in the first half of last season, but they dropped off rapidly in the latter stages. The Wire have made a huge pre-season signing in Gareth Widdop, and promised to bring an exciting style to their game this season. They could have a big say this campaign.

Betfred says: The Airlie Birds narrowly missed out on the play-offs last season, and after a busy off-season in terms of recruitment – particularly the signing of Manu Ma’u from the NRL – they’ll be optimistic of mounting a serious challenge this campaign.

Betfred says: Leeds didn’t have the best 2019, but the signings they’ve made show a real sign of intent for the upcoming campaign. They’ve made four signings, including two-time NRL winner Matt Prior and Luke Gale from Castleford. You’d expect the Rhinos will be a completely different outfit this season.

Betfred says: The Dragons have threatened for the last few years, and looked set to make the play-offs last season before a poor run of form where it really counted. They’ve made some eye-catching signings in recent seasons, and have done so again with the addition of controversial Rugby Union star Israel Folau. They might surprise a few.

Betfred says: Cas went on a really strong run last season but, like Warrington, tailed off towards the end, just scraping into the play-offs. Their prep for the new campaign has been far from ideal, suffering pre-season losses to Bradford, Widnes and Toronto. They’ve made plenty of signings in the off-season but also lost star man Luke Gale, so it’s hard to know what to expect from them this term.

Betfred says: Toronto could be the surprise outfit this season. They topped the Championship last year with an incredible 26 wins from 27 games, and have dominated the pre-season headlines after the blockbuster signing of former All-Black Sonny Bill Williams. The Wolfpack sit in the ‘could be anything’ bracket at this stage; we’ll learn much more about their long-term chances after a few games.

Betfred says: Salford were the surprise package last season, missing out on Grand Final glory at the very final hurdle. They’ve lost Man Of Steel winner Jackson Hastings to Wigan, and have brought in twelve new faces. They now have plenty of questions to answer – are they as good without Hastings? How will their new players fit into the team? It’s difficult to gage how Salford will get on this season.

Betfred says: Wakefield flirted with relegation last season, and have made plenty of signings – blending youth and experience – to try and improve this campaign. It’s fair to suggest expectations won’t be too lofty at Belle Vue this season, but that could well work in their favour and they might just get on with business and enjoy a better season.

Betfred says: The Giants narrowly avoided relegation last season, and they have splashed the cash in a bid to move up the table this campaign. Simon Woolford has made a total of five signings, and you have to say it’s a case of so far so good after back-to-back pre-season wins against Halifax and Wakefield. Things look promising at this stage, but how long will it last?

Betfred says: Hull KR are favourites at Betfred to finish bottom this year. Head coach Tony Smith has brought in TWENTY new players ahead of the new season, and there could still be more on the way. Like Salford, that could go either way. It’ll take a few games to get an idea of their long term chances too.