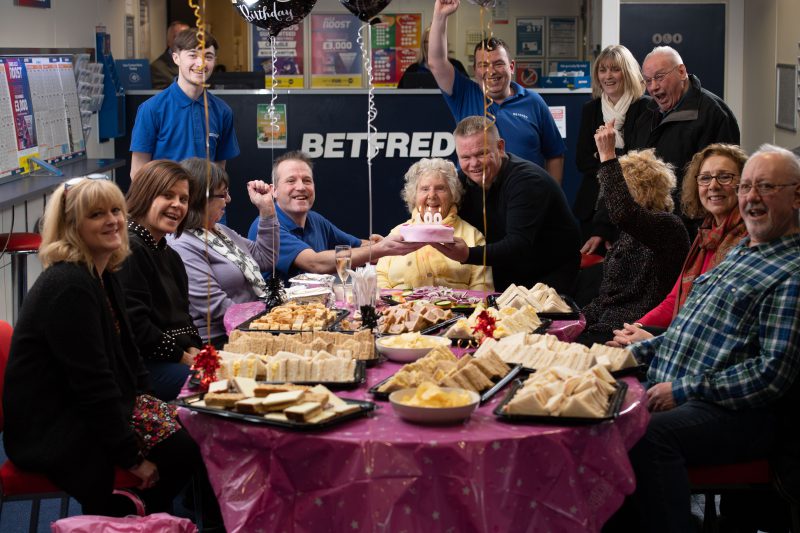 What are the odds? 100 year old Elsie Cronin celebrates her centenary With a surprise party at the local bookies where she still pops in three times a week for a bet on the horses. The Betfred regular turned 100 on Monday 03 February and shop staff and regulars organised the do as she popped in to place her bet - Monday 03 February 2020 Further info - Peter Spencer Mobile: 07876545621 Email: Peter.Spencer@betfred.com

The Queen sent a card – but the self-styled Bonus King Fred Done sprang a surprise party for the oldest punter in the land on her 100th birthday.

Elsie Cronin thought she was putting on her usual wager on the horses, but regulars and staff at the Betfred shop in Leyland, Lancashire, were out to make sure it would be a day she’d never forget by putting on a ‘reet old knees-up.

Twice-married Elsie, who has six grandchildren and two great grandchildren, puts her longevity down to porridge every day for breakfast, always looking on the bright side of life, alcohol only on special occasions, reading romantic novels, knitting, trifle as a treat – and a bet at least three times a week.

The former school dinner lady had a sparkle in her eye as she joked with Betfred boss Fred who telephoned her to check her impromptu party was going with a swing.

“I always go for a round robin bet on three selections, and I reckon I’ve broke even in the thirty-odd years I’ve been coming here.

“In the early days it was just full of fellas, but not anymore. I’ve had my chances with men, and two are enough. I’m not bloody daft.

“They say the good die young so I must be a bad’un!

“People always say I am the oldest punter in town – well I am that, if not in the country.

“I love the horses. I used to study the form but nowadays I go off their names, and I like anything to do with dreams or angels.

“I like football too, and my favourite players have always been Michael Owen, George Best and Tom Finney, who I met once in a bookshop.

“I like love stories because they always have a happy ending.

“Life is for living and I always have a good laugh and chat. I’ve never drank that much and I’ve given up with men, but not putting on a bet nearly every day.

“I’ve always liked a horse called Delicate Kiss because of its name. It never won, but it did on Saturday, two days before my birthday which was nice.

“I don’t feel any different being 100, except that more people have been talking to me. I still nod off watching television in the evening before the end of programmes which annoys me.”

Amongst the 30 revellers at her surprise party was Stuart Ross, 49, who knows Elsie only as ‘Mrs Cronin’ the cheery, long-serving dinner lady from when he was a pupil at Broadfield Junior School in Leyland.

“She used to look after us on the playground and you knew with her if you did any wrong you would have to stand by the naughty wall, which is where I went a few times.”

Elsie’s first job was as a maid at a business man’s house in Salford, and then when her first husband Joseph served in the army she worked at a rubber factory manufacturing gas masks during the Second World War.

He died of a heart attack aged 38, and she married Londoner Harry who she met at the local fish and chip shop where she worked part-time before taking the school job that she held for 17 years.

She’d never travelled abroad till the age of 70, when she went on a family holiday to Turkey and North Cyprus – but has since been to Greece, Spain and Germany.

Elsie, who still has ambitions to travel as far afield as New Zealand, says that as well as enjoying a good chuckle it is important to walk rather than be driven as often as possible – and always eat “proper” food, just like the hot pot that was the children’s favourite at Broadfield Junior School.

Don’t miss…the pick of the day's betting action brought to you Betfred, today looking at the Champions League, Championship and Snooker's Player Championship.