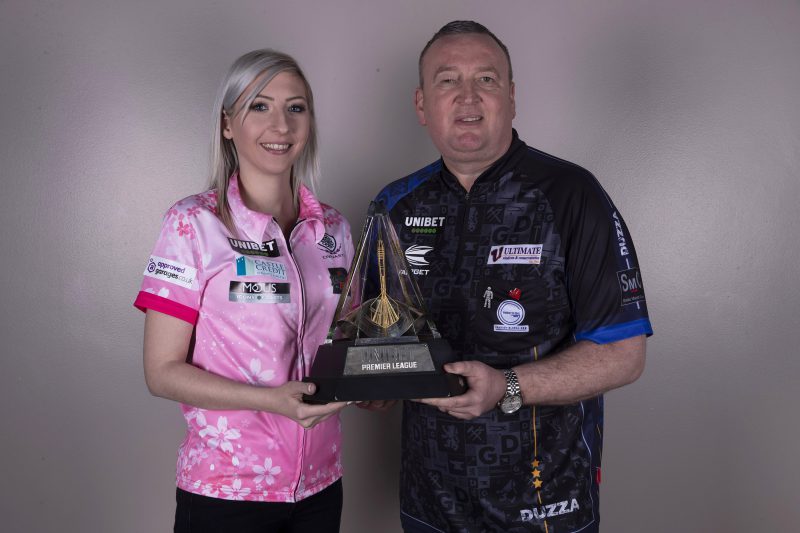 Fallon Sherrock will continue her history-making exploits on Night Two of the 2020 Unibet Premier League as she becomes the first woman to play in the tournament, while Scottish World Cup winners Gary Anderson and Peter Wright will face off in Nottingham on Thursday.

Sherrock, who became a global sensation in December by becoming the first female player to win matches at a PDC World Championship, will take on Glen Durrant as the Premier League roadshow continues at Motorpoint Arena.

The second of nine Challengers to star in this year’s Premier League, Sherrock insists she is unfazed at the prospect of performing in front of 6,000 fans, many of whom have travelled to witness her highly-anticipated debut.

The Teessider missed just two darts at a double in a ruthless 7-3 defeat of 2018 Premier League runner-up Smith, and Durrant knows he will need to be just as clinical against Sherrock.

Before Durrant and Sherrock’s encounter, Scotland’s top two Anderson and Wright will go head-to-head in a battle between two in-form super-powers of the sport.

Following a frustrating 2019 blighted by injury, Anderson has enjoyed a much-improved start to 2020, with victory over Daryl Gurney in Aberdeen backed up by winning his first PDC ranking title since August 2018 on Saturday.

Wright, meanwhile, enjoyed the perfect start to life as World Champion by winning The Masters earlier this month.

However, the world number two suffered his first defeat of 2020 in Aberdeen at the hands of Michael van Gerwen as the Dutchman went some way to avenging his World Championship final defeat.

Testament to his stunning form, Wright played his part in setting a new PDC record combined average in his clash with Nathan Aspinall at Players Championship Two on Sunday.

Aspinall, who averaged 117.5 in that match, went on to claim his fourth senior PDC title three days after getting his debut Premier League campaign off to a winning start against John Henderson.

The world number eight is brimming with confidence ahead of his meeting with last year’s runner-up Rob Cross as he seeks back-to-back wins.

The first nine nights of action will see a different Challenger in action, culminating in Judgement Night in Rotterdam on March 26 where the ninth-placed regular player will be eliminated.

After last week’s debut success in Aberdeen top of the table Durrant takes on Sherrock and is likely to receive a tremendous reception in front of a sold-out crowd at The Motorpoint Arena, and Unibet make her the 5/1 underdog, and a 25/1 chance to be ‘King of the Oche’ against the three-time Lakeside Champion.

Unibet Spokesperson Jack Milner: “Top of the table Durrant was cut to 18/1 from 28/1 to win this year’s Premier League after last week’s 7-3 defeat of Michael Smith, but now faces the unenviable task of facing darts’ new poster girl in front of a likely raucous atmosphere in Nottingham.

“Durrant is 1/3 to maintain this seasons’ 100% record and features in several of Unibet’s enhanced specials; 3/1 in an enhanced treble with warm favourites Gerwyn Price and Michael Van Gerwen, whilst 10/1 to be King of the Oche alongside the latter in his headline match against Daryl Gurney.”